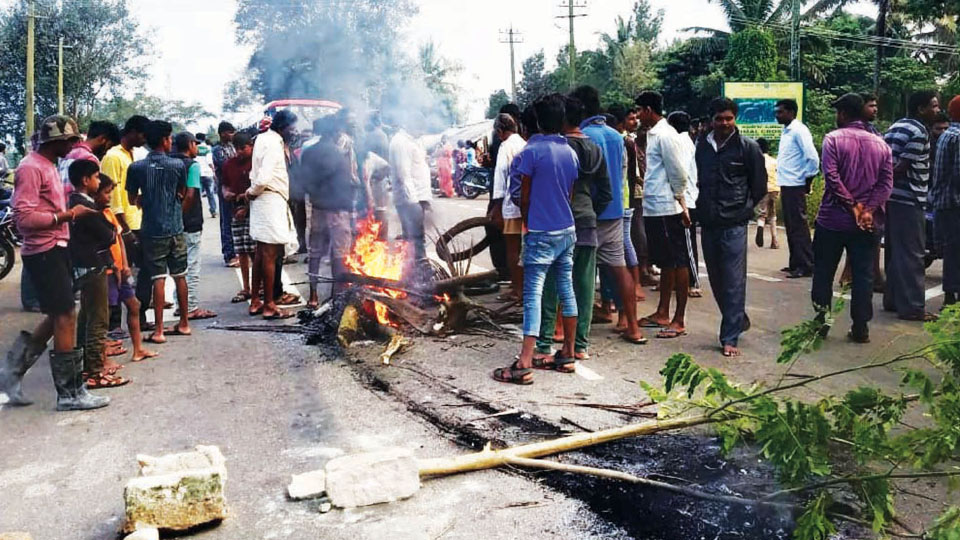 Hunsur: A man, who was on his way to his field was attacked by a wild elephant resulting in him suffering serious injuries.

The incident took place at about 6 am yesterday at Kinagurupura village in the taluk and the injured has been identified as 38-year-old Raghavendra, who has sustained injuries on his legs and chest. He was rushed to Hunsur Government Hospital and was later shifted to a private hospital in Mysuru for further treatment.

Irked over frequent raids by wild elephants which are destroying crops and injuring people, the villagers stage a road block by setting fire on the middle of the H.D. Kote-Hunsur Road and shouted slogans against the Forest Department.

The protestors said that despite lodging several complaints over menace of wild elephants, the Forest Department has failed to control it and demanded compensation for the crop loss.

The villagers withdrew their protest after Hunsur Circle Inspector Poovaiah assured them of taking steps to control the menace of wild elephants.

Poovaiah said that a Police beat vehicle would be deployed on roads every night where there is menace of wild elephants and added that a meeting would be convened before Dec. 20 consisting of Police and Forest officials along with villagers to discuss about the measures to be taken to control elephant menace.

He further said that a night beat vehicle has been deployed since yesterday.