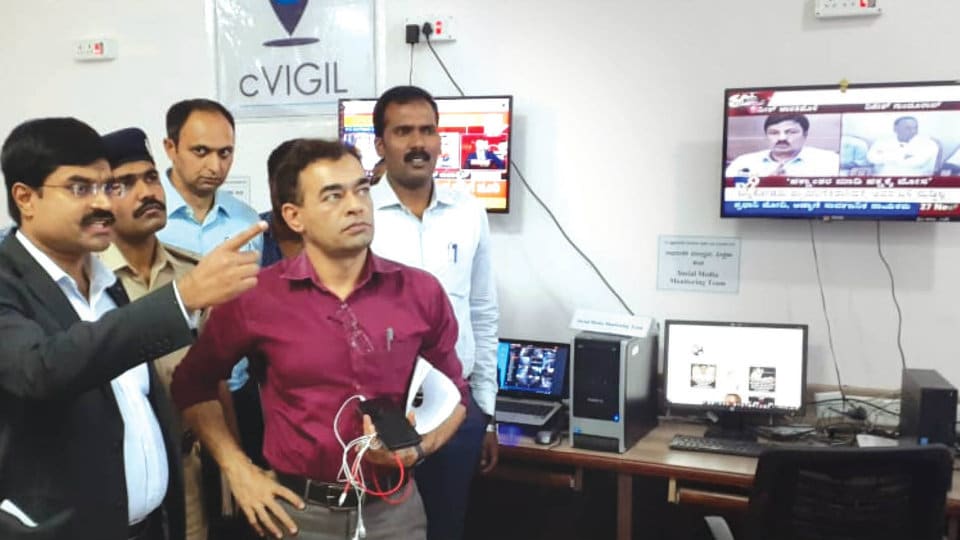 Mandya: By-election Special Officer Munish Moudgil has said that all measures have been taken in entire Mandya district to prevent any poll code violations in the backdrop of K.R.Pet bypolls.

Addressing a press meet at the Deputy Commissioner’s Office here yesterday, Moudgil called for the co-operation of the voters for ensuring a peaceful poll and said that the members of the public can call Helpline number 1950 for any  model code violations.

Stating that social media platforms too are under scanner, he said that photos and campaigns of candidates posted  on Facebook, Twitter, WhatsApp, Instagram etc., will be added to the election expenses of the particular candidate.

Maintaining that high alert has been sounded to keep a close tab on illegal transportation of liquor across the district, Moudgil said that petty shops, kirana stores and other shops are being raided for storage of liquor. He further said that so far, 498.956 litres of liquor worth about Rs.1,86,873,fifteen two-wheelers and a four-wheeler, 749 sarees worth about Rs.2.24 lakh and other articles have been seized in connection with poll code violations. A total of 189 cases have been booked for model code violations and other poll malpractices, he added.

Mandya Deputy Commissioner Dr. M.V. Venkatesh said that dry days have been declared 48 hours before polling in K.R. Pet and surrounding taluks.  All measures are in place to prevent any violence or untoward incidents ahead of voting day (Dec. 5) and on the counting day (Dec.9), he added.

The DC further said that Home Minister Basavaraj Bommai will be served a notice for failing to stop his car at the check-post  for undergoing a check by officials. Also two Policemen attached to the check-post have been suspended for dereliction of duty, he added.