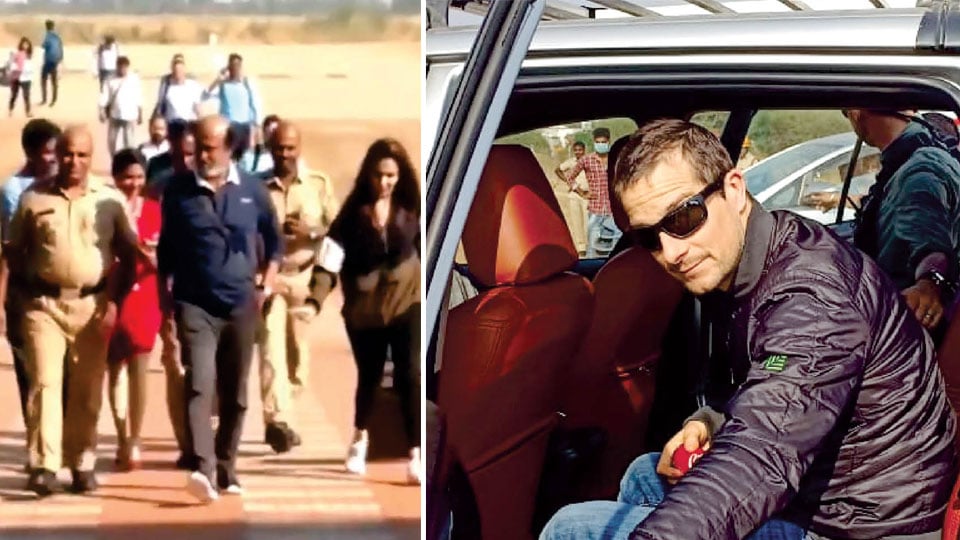 Man Vs Wild’s Bear Grylls at Bandipur with Rajinikanth

Mysuru/Mysore: Tamil Superstar Rajinikanth is in Bandipur shooting for a documentary with Bear Grylls of Man Vs Wild– fame, produced by Discovery Channel. Bollywood actor Akshay Kumar will be joining them for the shooting this afternoon, it is learnt.

Bear Grylls arrived at Gundlupet Helipad this morning while Rajinikanth landed at Mysuru Airport yesterday. It may be recalled that Bear Grylls’ documentary with PM Modi was telecast in August 2019.

Grylls then proceeded towards Chamanahalli village, where the shooting is scheduled to be held near the old Iron Bridge in the fringes of Kalkare and Moolehole Forest range along Karnataka-Kerala border.

Meanwhile, a nature-lover said “Authorities should stop giving permission for film shoots and even documentaries in forest reserves, since such activities disturb wild animals.”

Responding to this, the documentary crew said, “We have signed an MoU with Karnataka State Forest Department, represented by the Conservator of Forest and Field Director, Project Tiger, Bandipur. We will shoot inside the forest area for two days and then the actors will leave tomorrow after a 2-hour shoot.”

However, the documentary team will shoot for a few more days in and around Bandipur, for which they have obtained  permission from the Chief Wildlife Warden. The first copy of the documentary will be presented to the Warden, said the sources.

Fans elated: Rajinikanth flew on a TruJet flight from Chennai to Mysuru Airport yesterday. The flight was delayed by almost an hour due to fog in the city. Although it inconvenienced the star a little, the fans were elated to spend more time with him and take countless selfies.