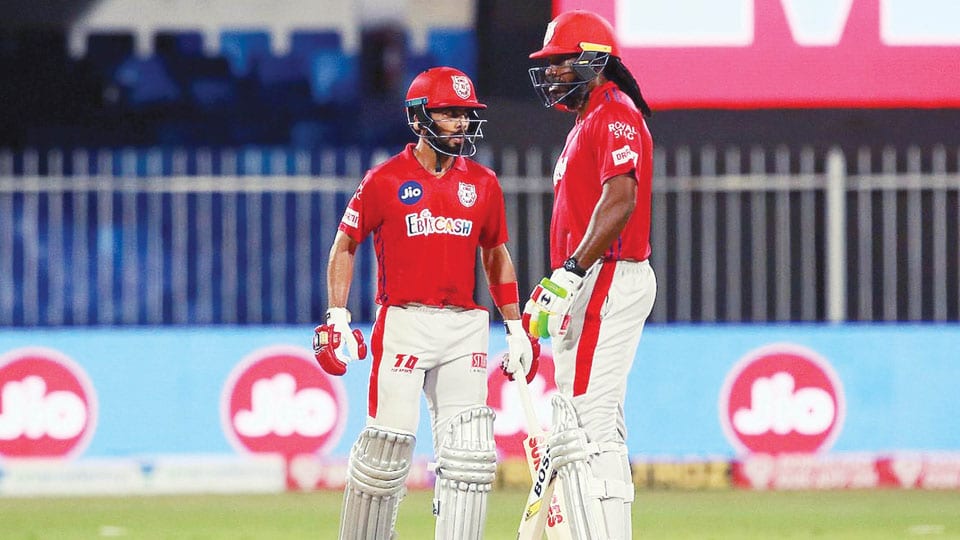 Needing 150 runs to win, KXIP openers — K.L. Rahul and Mandeep Singh — made a watchful start, scoring 36 runs in the powerplay.

KXIP lost their skipper on the final ball of the eighth over after Varun Chakravarthy trapped Rahul before the stumps to give KKR their first breakthrough.

Chris Gayle walked out to bat following Rahul’s dismissal and hammered two sixes in the first five balls he faced as KXIP moved to 67/1 after the end of the ten overs.

The big-hitting West Indian tonked his third six of the match in the next over as he completed 1,000 IPL runs for KXIP, joining Mandeep, who achieved the same feat earlier in the match.

Gayle continued his merry ways while Mandeep gave him good company as the pair completed their 50-run stand and the team’s hundred in the 14th over.

A couple of overs later, Mandeep brought up a very special half-century and paid a tribute to his father who passed away a few days ago.

In the 17th over, Gayle hammered a four and followed it up with a six and completed his 30th IPL fifty, reaching the landmark in just 25 deliveries. Mandeep then creamed a four and a six off Pat Cummins in the 18th over.

While Gayle got out in the penultimate over with KXIP needing three runs, Mandeep and Nicholas Pooran sealed KXIP’s win, which helped them to move to the fourth spot in the points table.

Earlier, unchanged KXIP elected to bowl against KKR, who retained the playing XI which powered them to win against Delhi Capitals.

KXIP made early inroads as Glenn Maxwell and Mohammad Shami scalped three wickets in the first two overs. While Maxwell had Nitish Rana caught at short fine-leg, Rahul Tripathi and Dinesh Karthik edged one to the wicket-keeper and KXIP skipper K.L. Rahul.

But Shubman Gill and KKR skipper Eoin Morgan counter-attacked. The two joined forces when KKR were 10/3 after two overs and hammered 44 runs in the next overs to take KKR past 50 at the end of powerplay.

The pair hit five fours during the period of the third and fifth over before targeting Shami in the sixth over, creaming two sixes and as many fours.

While the powerplay was over, the KKR duo continued to attack and scored 26 runs in the next two overs to take KKR to 80/3.

But KXIP pulled back the things as Ravi Bishnoi broke the Morgan-Gill’s 81-run partnership, dismissing the KKR captain in the 10th over after he mistimed his sweep and was holed out in the deep. In the 11th over, KKR lost Sunil Narine after he chopped a Chris Jordan slower delivery onto the stumps.

Meanwhile, Gill completed a well-compiled half-century in the 14th over. KKR though lost two wickets in the next two overs as M. Ashwin and Bishnoi respectively got Kamlesh Nagarkoti and Pat Cummins out.

Gill and Lockie Ferguson hit four fours in the next two overs before the former got out in the penultimate over after a well-compiled 57.

KKR eventually posted 149/9 on the board while for KXIP, Shami picked three wickets.