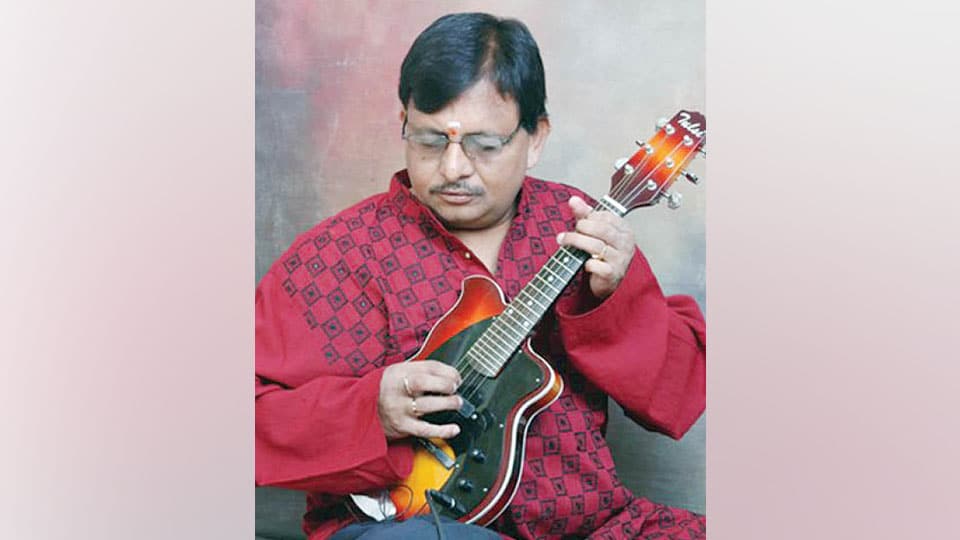 City’s cultural organisation Bhanuvara Sanje Geleyara Balaga, popularly known as BHASANGE Balaga, is providing platforms for young talents in the field of performing arts by organising programmes on a monthly basis. The Balaga is also conscientiously organising a couple of programmes annually by senior and popular artistes to offer musical feast to Mysuru’s art-loving audience.

One such programme “Mandolin Magic” by N.S. Prasad, one of the most celebrated mandolin players in India, is organised by the Balaga as their 83rd monthly programme at Vasudevacharya Bhavan of Nadabramha Sangeetha Sabha, JLB Road, Mysuru, on Sunday (June 23) at 6 pm.

Accompanied by Nagabhushana Udupa on keyboard, G.L. Ramesh Kumar on flute, Raghunath on tabla and Vinay Rangadhol on rhythm pad, Prasad will be presenting Kannada and Hindi film hits.

Born and brought up in Mysuru and blessed with a family background rich in music, Mandolin Prasad started learning Veena under the tutelage of Vid. V. Deshikachar. He was later on enticed to learn mandolin under the guidance of Guru Satyanarayana. Today, an accomplished String Instrument player, his expertise is not limited to mandolin or Veena but he is adept at playing Guitar and Keyboard. After his post-graduation, music became his profession by choice.

He is a well-known “Graded Music Composer” in All India Radio. Through his professional journey, he acquired mastery over Mandolin and is rightly endeared by one and all in the music circuit as ’Mandolin Prasad.’

During his illustrious career, he has composed and arranged music for various programmes, fusion albums, jingles for tele-serials and films. Mandolin Prasad has received many awards like ‘Best string player’ award by Bangalore Music Academy, ‘Kalashree’ by Sangeetha Nruthya Academy, ‘Kala Kovida’ by Hombale Pratibha Ranga and ‘Swara Samrat’ by Gayana Ganga. The movie Mithai Mane where he has given the background score has won the best children movie award and also screened at Kairo film festival with an award.

Presently, a resident of Bengaluru, Prasad has founded a music institution by name Ragashree Institute of Music.

BHASANGE Balaga welcomes all music-lovers to the concert. Entry is free.