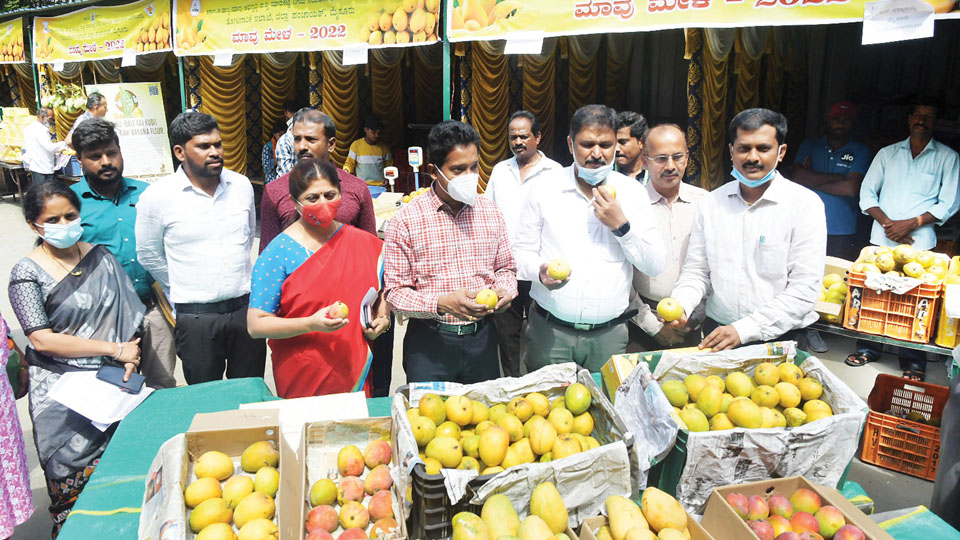 Mysore/Mysuru: A three-day Mango Mela began at Kuppanna Park this morning and high prices forced many customers to buy only limited stocks instead of buying large quantities. Customers were seen requesting growers to reduce prices as the rates were almost similar to the outside market.

The 9 am to 9 pm Mela was inaugurated by Deputy Commissioner Dr. Bagadi Gautham and over 26 stalls have been set up that were occupied by growers from Mysuru, Mandya, Ramanagara Chikkaballapur and Kolar. Over 12 varieties of luscious mangoes were on sale. Though people came to the Mela in large numbers, many were complaining that there was not much difference in the prices of the fruits when compared to the open market. But the growers were convincing them that crop loss due to unseasonal rain, irregular flowering and decaying fruits had contributed to the price rise.

Customers were wooed by saying that they have not used any artificial methods or chemicals to ripen the mango but have followed the natural ripening process. Moreover, the transport cost has increased due to a hike in fuel prices. Many customers just looked at the varieties and did some window shopping while some made purchases of limited and select special varieties.