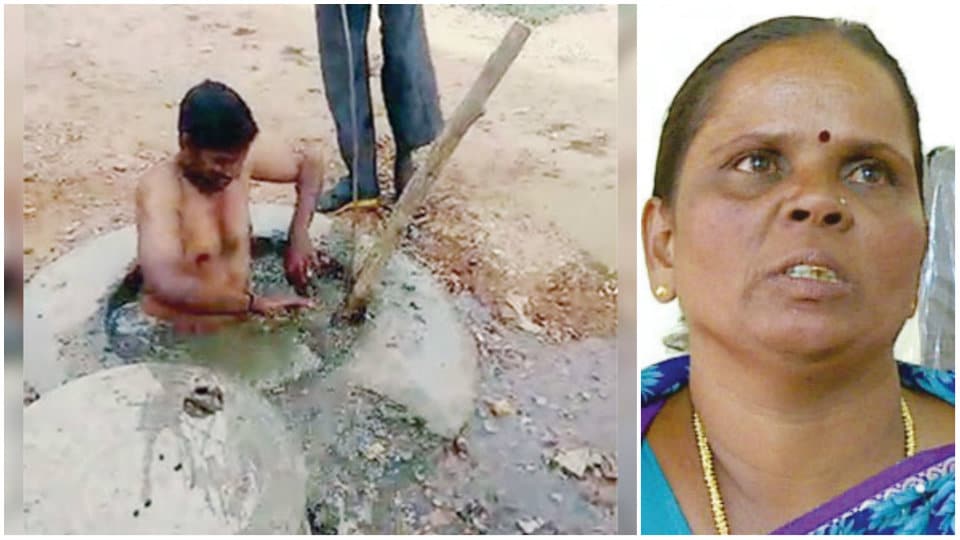 On that day, Geetha and Panchayat Development Officer (PDO) Anand allegedly forced a civic worker to climb down a manhole that was full with sewage. They asked Pourakarmika Ganesh to get inside the overflowing manhole in front of Geetha’s house at Thavarekere village.

Ganesh, working on contract basis, was threatened by Geetha that he would be sacked if he failed to clean the manhole. Photos and videos of Ganesh getting into the manhole were circulated widely in the media.

The complaint was filed for criminal intimidation and for violations of the Prohibition of Employment as Manual Scavengers Act which prohibits local authorities from employing humans to clear sewer lines and septic tanks. All of these offences could attract jail terms of two years.

Following the incident, ZP Chief Executive Officer (CEO) P. Shivashankar had recommended the State Government for dismissal of the President for violating the Karnataka Gram Swaraj and Panchayat Raj Act, 1993.

An official in the Mysuru Zilla Panchayat said that the orders issued on Geetha’s dismissal had been communicated to ZP CEO through an e-mail. The hard copy of the order is yet to reach by post, the official added. Geetha is missing from her house and the K.R. Police are on the lookout for her.

“This is a warning to elected representatives and officers who take Pourakarmikas for granted and ask them to do inhuman jobs such as these,” he said.