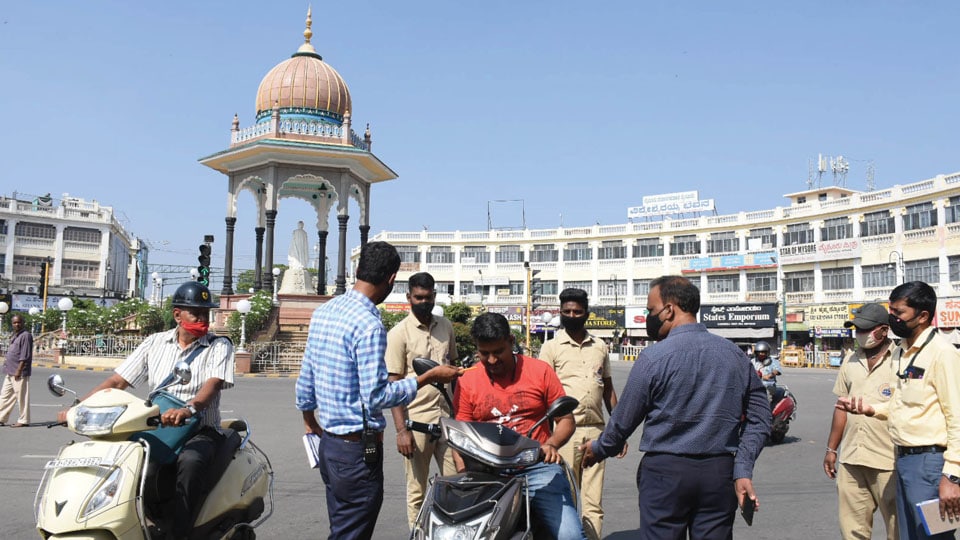 Mysore/Mysuru: After a nudge from the State Government and the District Administration to strongly deal with people without masks, the Mysuru City Corporation (MCC) and the City Police have jointly begun an operation to levy fines. The intensified drive that began yesterday saw teams from MCC and the Police stopping pedestrians and motorists and issuing challans after collecting money for violation. While people within city limits are fined Rs. 250, people residing and travelling without masks beyond city are fined Rs. 100.

The mask mandate assumes significance in the wake of increasing COVID-19 and its Omicron variant forcing the Government to re-impose restrictions including night curfew and weekend curfew. What has upset the administration is the casual and careless way people are responding to the pandemic, risking their own lives and the lives of others.

In fact, there are people who take the mask in their pockets before going to a restaurant. They wear the mask before entering a restaurant as they will not be allowed entry. But these same people do not wear masks on the road, said a Policeman who was on duty on the streets.

Police teams accompanied by MCC staff were seen stopping people for not wearing masks even as persons without masks and helmets particularly two-wheeler riders turned their vehicle back on sighting the police and taking other routes but some of them, who failed to do it, were caught by the Police and fined.

During the drive, many people were found keeping their masks inside their pockets and in their vehicle dashboard. While several commuters told the Police that since they are wearing helmets they avoided wearing masks. They were told to obey the Government rules and they were let off with a warning.

Meanwhile, City Police Commissioner Dr. Chandragupta told reporters that fines will have to be paid for every violation including not wearing masks and not maintaining social distance. While purchasing food items during weekend curfew too, people and shopkeepers are bound to follow rules, he added.