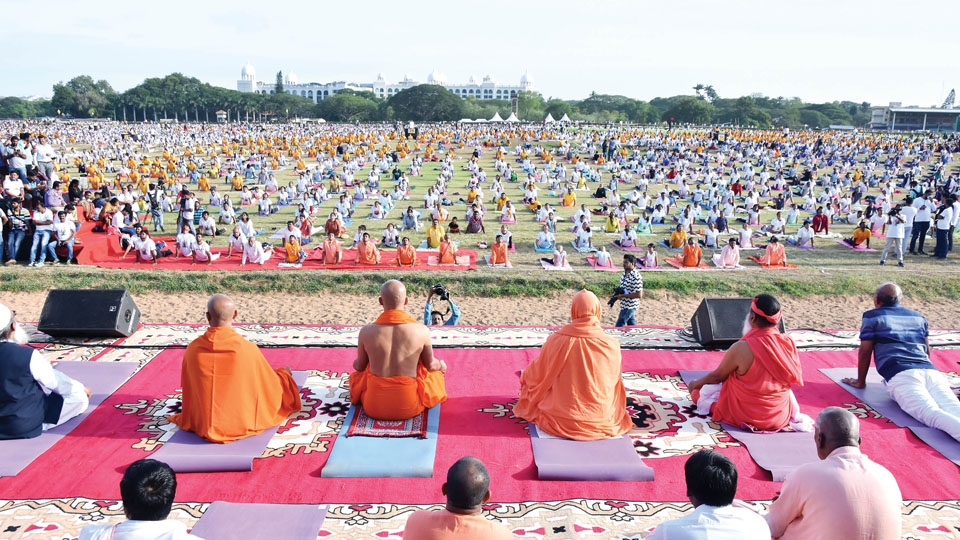 Mysore: They were all out in large numbers as early as 5 am even though they had no Guinness World Records (as done in 2017) to set or break. They were simply there for the joy of participating in the fifth edition of International Yoga Day at the sprawling Mysore Race Club (MRC) premises, organised by District Administration, Mysuru City Corporation, Department of Tourism and Yoga Federation of Mysore, here this morning.

Yoga enthusiasts from different parts of the city in different colours and of all ages started arriving at the venue and occupying the blocks earmarked for them and by 6 am there were thousands gathered.

District in-charge Minister G.T. Devegowda, who inaugurated the event, said that it was a heartening sight to see nearly 70,000 people gathered early in the morning to participate in the International Yoga Day. Just as crops need manure to grow, yoga is needed for one to keep a healthy, calm mind and body. Mysuru has already been in the forefront of yoga internationally by creating a Guinness World Records in 2017.

The District Administration was seriously considering entering the Guinness World Records contest once again next year and all preparations for this will begin in right earnest from this year itself, he said.

Avadhoota Datta Peetham’s Sri Ganapathy Sachchidananda Swamiji, who has sponsored the food packets for the yoga enthusiasts, said that yoga has come from the Treta Yuga and there are several dimensions to yoga. It has now become popular all over the world.

There was a time when till the last bone in the body or the skin was alive man was alive. Now the moment man loses his breath he is gone. Hence, to learn and perform yoga daily becomes very important, he said.

Avadhoota Datta Peetham has trained 6,000 yoga teachers who are spread all over the world and teaching yoga, added the Sri Swamiji.

Many school students were seen doing warm-up exercises as soon as they spread the mat which they had brought. Even though the asanas had to begin from 7 am it began at 7.20 am and the 45-minute yoga asanas ended at around 8.10 am. After performing exercises for 4 minutes, 25 asanas, 14 minutes of Pranayama and meditation and with the chanting of the Shanthi Mantra for a minute the performance came to a close.

A message from Vice-President Venkaiah Naidu addressed to Mysureans was read out which said that Yoga is for the maintenance of health and everyone should practice it without fail. He also wished well for all the Mysureans participating in the International day of Yoga.

The Yoga Anthem, which has been composed by Mysuru-based internationally renowned Violinist Mysore Manjunath with his unique Raga Bharata and the lyrics for the song written in Sanskrit by Bengaluru-based Shatavadani R. Ganesh was played at 6.30 am before the commencement of exercises.

Speaking to Star of Mysore here this morning, Mysore Manjunath, said that he was happy to hear that Chief Minister H.D. Kumaraswamy had himself tweeted about the Yoga Anthem and how good it was. “It was difficult to compose a new Raga as there are already more than15,000 ragas. I had to keep checking it again and again to see whether it was really new and finally found that Raga Bharata has not been composed earlier,” he said.