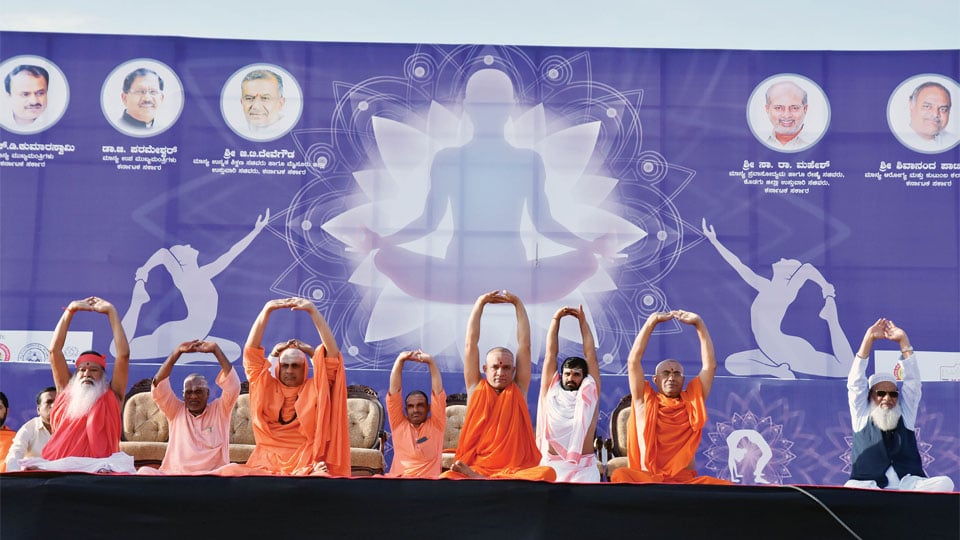 Mysore: Suttur Seer Sri Shivarathri Deshikendra Swamiji and Adichunchanagiri Seer Nirmalanandanatha Swamiji, addressing media after the conclusion of the fifth edition of International Yoga, said that yoga has gained international recognition and Mysuru was also in the forefront.

The city has contributed a lot to the growth of yoga because of the great work done by international yoga masters who came from Mysuru and spread its knowledge all over the world.

Prime Minister Narendra Modi took it to another level by asking the United Nations to declare June 21 as International Yoga Day, said the Suttur Seer.

Mysuru is the cultural as also the yoga capital besides also bagging the clean city tag a couple of times.

The presence of nearly 70,000 yoga enthusiasts today is a testimony to this.

Sir Khazi of Mysuru Hazarath Moulana Mohammad Usman Shariff, addressing the media, said that yoga has got international recognition and people irrespective of caste, religion or creed must learn and adopt yoga in their daily lives for a clean body and a healthy mind.

The yoga enthusiasts of all hues and colours kept coming even after the event at the fifth edition of International Yoga Day had begun.

A Vietnamese Tiam, a direct disciple of the late internationally renowned Yoga Guru B.K.S. Iyengar, was the cynosure of all eyes as she performed some difficult asanas with ease.

She told Star of Mysore that she had heard about her Guru’s Mysuru connections and hence she had come all the way from Vietnam to participate in this year’s Internationa Yoga Day celebrations.