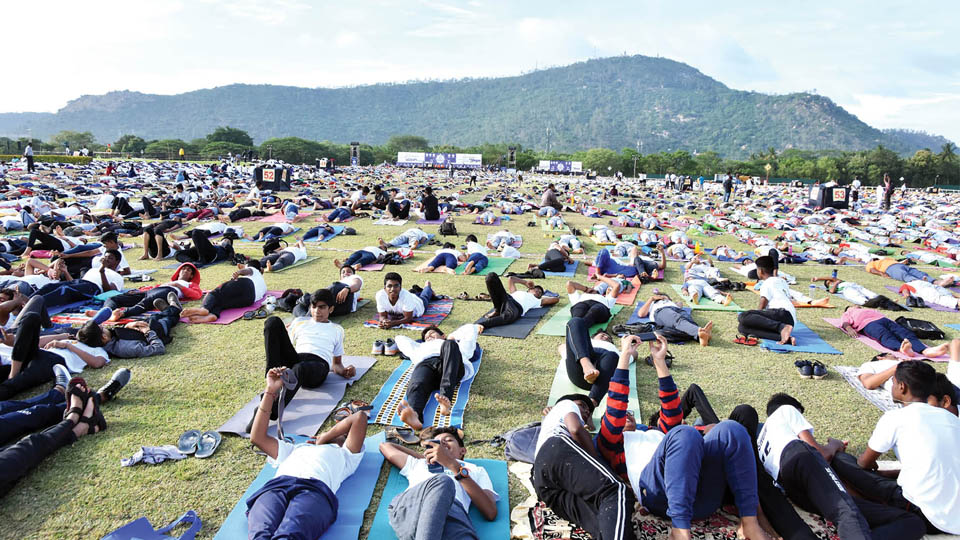 In spite of the best efforts of the organisers to hold the event in a serious way so that everyone who participates in the yoga day celebration can take something back and adopt its practice into their daily lives, there were a few students who just did not care or understand the seriousness of the situation.

They were seen just casually lying on the mats at the rear end of the gathering and coolly viewing into their mobile phones which left the organisers and some of the participants wondering whether from next time, the mobile phones should be allowed into the venue at all.

Navaneeth Caterers were the suppliers of breakfast for the nearly 70,000 people gathered at the sprawling Mysore Race Club premises. Speaking to Star of Mysore caterer Shivanna said that they were ready with 60,000 packets of upma with each packet weighing 250 grams. However, when it was felt that there could be a shortage, another 10,000 packets of rice bath was prepared and distributed.

It may be recalled that Hindustan Petroleum Limited (HPCL) had donated two mobile toilets to the Mysuru City Corporation recently. These two toilets were pressed into service at the mega event and its usefulness could be immediately gauged as both men and women used the toilets in large numbers.

Plastic-free venue: The highlight of the fifth edition of Yoga Day was that the whole place was plastic-free. As a first step the water cans were kept in all strategic places for people to drink water from as no one was allowed to carry plastic water bottles. Dust bins were also placed for people to put the food packet covers after the breakfast.