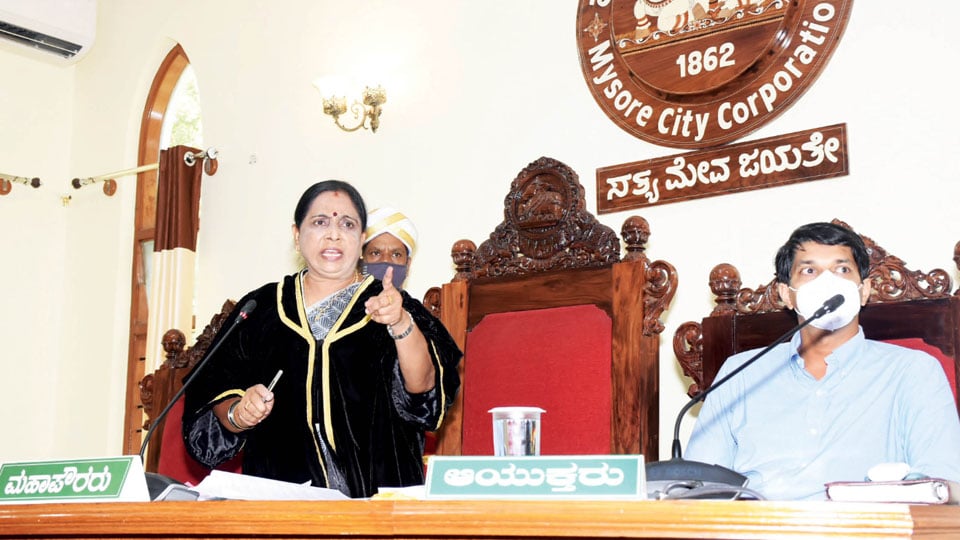 Mysore/Mysuru: Mayor Sunanda Palanetra and Mysuru City Corporation (MCC) Commissioner G. Lakshmikantha Reddy attended a meeting organised by the Ministry of Housing & Urban Affairs (MoHUA) in New Delhi on Oct. 2 where they were briefed about the second phases of Swachh Bharat Mission-Urban (SBM-U) and Atal Mission for Rejuvenation and Urban Transformation (AMRUT).

Speaking to Star of Mysore this morning, the Mayor said that Prime Minister Narendra Modi addressed the meeting that was called to discuss the campaigns to be launched next and Mayors and Commissioners of all City Corporations across India were present. From Karnataka, Mayors and Commissioners of Mysuru, Shivamogga and Davanagere City Corporations were invited, she added.

According to a release from the Press Information Bureau, the MoHUA has launched the seventh edition of the sanitation survey of cities conducted by the Swachh Bharat Mission-Urban as well as a new version of the Swachhata app. Prime Minister Narendra also launched SBM-U 2.0 and Atal Mission for Rejuvenation and Urban Transformation (AMRUT) 2.0.

As part of the celebrations of 75 years of Independence next year, the sanitation survey would have the theme of “[email protected]” and take feedback from senior citizens regarding cleanliness in their cities.

The focus of SBM-U 2.0 in the next 5 years will be on sustaining the sanitation and solid waste management outcomes achieved and accelerate the momentum generated, thus taking Urban India to the next level of ‘Swachhata’. Special focus will be put on the well-being of sanitation and informal waste workers, through provision of personal protective equipment and safety kits, linkages with Government welfare schemes along  with their capacity building, the PIB release said.

The objective of AMRUT 2.0 is to provide 100 percent coverage of water supply to all households in around 4,700 ULBs, by providing 2.68 crore urban household tap connections, thereby benefiting around 10.7 crore people. Rejuvenation of water bodies and urban aquifer management will be undertaken to augment sustainable fresh water supply.  Recycling and reuse of treated wastewater is expected to cater to 20 percent of total water needs of the cities and 40 percent of industrial demand. Under the Mission, fresh water bodies will be protected from getting polluted to make natural resources sustainable, the release added.