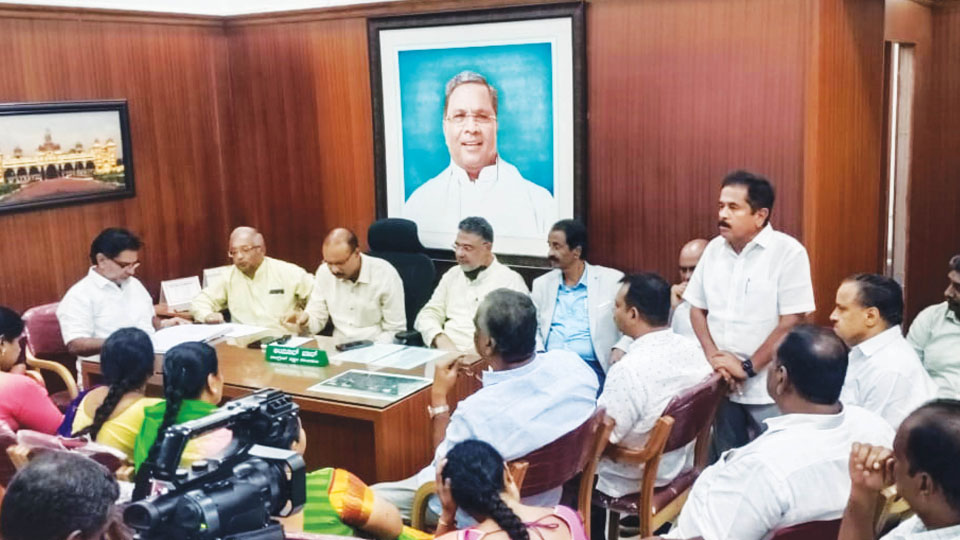 Congress, BJP stick to their stand

Mysore/Mysuru: With the Mayoral Polls just two days away (Sept. 6), the two National parties: Congress and BJP, have decided to stick on to their stand of contesting independently, while the JD(S) has adopted a wait and watch policy, with none of the two parties (Congress and BJP) coming forward for an agreement on sharing power in the Mysuru City Corporation (MCC).

The Congress and BJP leaders held their respective party meetings on Saturday, during which it was resolved to contest on their own strength, rather than entering into an alliance with the JD(S). The JD(S), which was hoping that both the National parties would knock on its door seeking support, has been left disappointed as the two parties are unwilling to enter into an alliance right now, with no party having a majority of its own to come to power in the 65-member body.

The BJP held a meeting yesterday under the leadership of Party State Vice-President Nirmal Kumar Surana, who has been tasked with working out strategies for the MCC Mayoral Polls. The meeting was attended by MLAs L. Nagendra and S.A. Ramdas, In-charge Mayor Sunanda Palanetra, State BJP Vice-President M. Rajendra, party Corporators and other top leaders. The BJP has a voting strength of 27 members, including Corporators, MLAs and the lone Lok Sabha MP.

After the meeting, City BJP President T.S. Srivatsa said that  the meeting resolved to contest the Mayor Polls independently. The party candidate for the Mayor and Deputy Mayor posts will be announced on Monday (Sept. 5).

On the other hand the Congress, which had ruled the MCC in alliance with the JD(S) for the first two terms of the current tenure of the MCC, too has resolved to contest the Mayoral Polls independently. The Congress leaders held a meeting on Saturday under the leadership of KPCC Working President R. Dhruvanarayan and MLA Tanveer Sait. MLC Dr. D.Thimmaiah, former MLA M.K. Somashekar and other party leaders and Corporators attended the meeting.

The Congress has a voting strength of 26, who also include the party MLAs and MLCs , apart for Corporators. Meanwhile, the JD(S) , which wants to be a king maker, has adopted a wait and watch policy after the BJP did not give any assurance on supporting the party in the Mayoral polls. It is said that the BJP had assured on supporting the JD(S) when the JD(S) chose to remain neutral in the Mayoral Polls held in August last year, when BJP candidate Sunanda Palanetra got elected, thus becoming the first BJP Mayor in MCC history.

However, the JD(S) is still hopeful that the BJP will keep its assurance given during the last Mayoral Polls, when it had promised to support the JD(S) during the future Mayoral polls.The JD(S) is banking on the negotiative powers and efforts of  K.R. Nagar MLA S.R. Mahesh, who is the Chief strategist for the party in the Mayoral Polls. The party is working out last minute strategies to somehow bag the Mayor post. The party has multiple aspirants for the Mayor post, who include K.V. Sridhar, SBM Manju and M.D. Nagaraj.

In the meantime, it is learnt that there will six new voters for Mayoral polls. The additions are Congress Corporator Rajani Annaiah, who won in the By-election from a MCC ward, BJP MLC A.H. Vishwanath, MLCs Dr. D. Thimmaiah and Dinesh Gooligowda of the Congress, who were elected from the Legislative Council seat from the twin member Mysuru-Chamarajanagar and Mandya respectively and JD(S) MLC C.N. Manjegowda (Mysuru-Chamarajanagar) late last year and Madhu G. Madegowda, who was elected from the South Graduates Constituency in June this year.