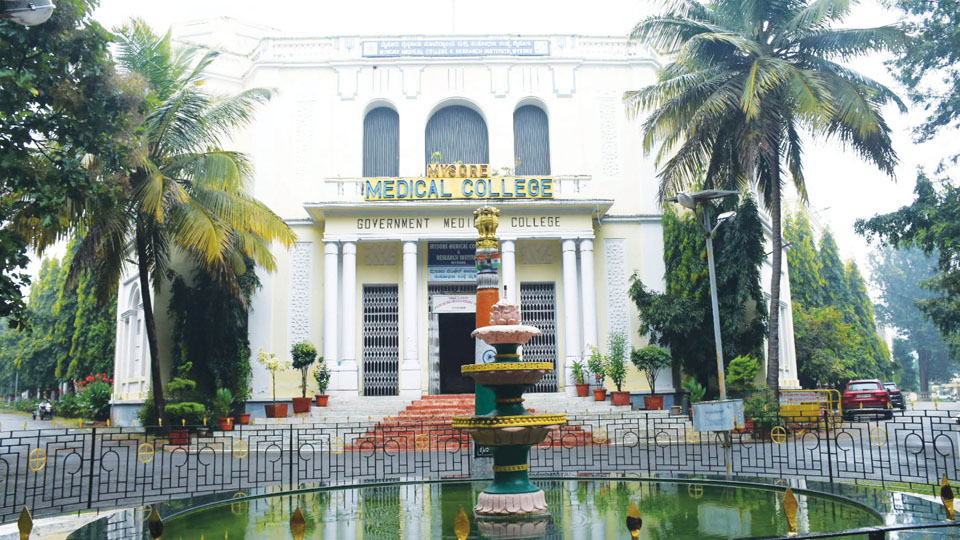 Institute seeking an increase from the current 150 to 250 seats

Mysore/Mysuru: The number of Under-Graduate Medical seats (MBBS) in Mysore Medical College and Research Institute (MMC&RI), the first one in the State and among the oldest Medical Colleges in the country, is expected to go up by 100 from the next academic year (2022-23), with the Institute seeking an increase in intake of seats from the current 150 to 250.

MMC&RI had submitted a proposal to National Medical Commission (NMC) six months ago, following which a 10-member NMC team visited the College and reviewed its infrastructure.

In the hope of getting nod from NMC for increasing MBBS seats, the MMC&RI has taken up various infrastructure development works, including construction of two new boys and girls hostels, besides a Lecture Block with each classroom accommodating 300 students and an Exam Hall to accommodate 500 students.

MMC&RI Dean and Director Dr. C.P. Nanjaraj told Star of Mysore that they are confident of getting the NMC nod as whatever is required for increasing the intake is being done. Pointing out that the MMC&RI has five big Hospitals attached to it — K.R. Hospital, Cheluvamba Hospital, PKTB Sanatorium on KRS Road, Trauma Care Centre and Princess Krishnajammanni Super Speciality Hospital , also on KRS Road — he said that the infrastructure in all these Hospitals is being improved to meet all the NMC requirements for hiking the Medical seats intake.

“Two Hostels with 150 rooms each are being constructed on the campus of PKTB Hostel on KRS Road, which can totally accommodate about 900 students. The PG students and interns of MMC&RI will be moved to the old hostels located in the heart of the city and all MBBS students will be accommodated in the new hostels once they are ready. Also, the Lecture Block is coming up at the old exhibition building adjacent to the MMC&RI main building. The Lecture Block will have three classrooms with each of them accommodating 300 students and an examination hall that can accommodate 500 students,” he said adding that UG and PG Libraries are also coming up on the same campus.

Continuing, Dr. Nanjaraj said that during the inspection, the NMC identified three major shortcomings that the Institute did not have an Emergency Medicine Department, a Rehabilitation Medicine Section and a Blood Transfusion Unit. Maintaining that the NMC was satisfied with all other facilities in the Institute, he said that the Medical body has also directed for establishment of an exclusive MRI scanning facility at K.R. Hospital. The MMC&RI Director expressed hope that with improved facilities, the Institute is certainly hopeful of getting sanction for additional intake of 100 MBBS seats from the next academic year.

READ ALSO  No dormitory for patients’ attendants at Cheluvamba Hospital

Elaborating, Dr. Nanjaraj said that a 5 ft. tall statue of a Nurse is being installed in front of the Nursing College in MMC&RI campus, which represents the importance of Nursing staff. The statue is being sculpted by renowned city Sculptor Arun Yogiraj and funded by MMC&RI Alumni Association, he added.

Pointing out that MMC&RI will be the first Medical Institute in the State to celebrate its centenary in a couple of years, he said that the Institute will be completing  98 years shortly and big plans are being charted out for its centenary celebrations.

Noting that an action plan of Rs. 500 crore is being prepared for centenary year, Dr. Nanjaraj said that the project includes infrastructure betterment in all Departments and OPD facilities. He said that measures will be taken to significantly increase the OPD capacity at K.R. Hospital, which is popularly called as Doddaspatre by the rural population.

Meanwhile, it is learnt that the erstwhile Medical Council of India (MCI) did not increase the MBBS seat intake for the reason that the Institute lacked bigger classrooms. Another reason was that the number of outpatients treated at K.R. Hospital, the teaching Hospital of MMC&RI, was less than 3,000 daily. However, the K.R. Hospital authorities attribute the drop in number of patients to the shifting of Jayadeva Hospital in K.R. Hospital premises to the new campus on KRS Road.