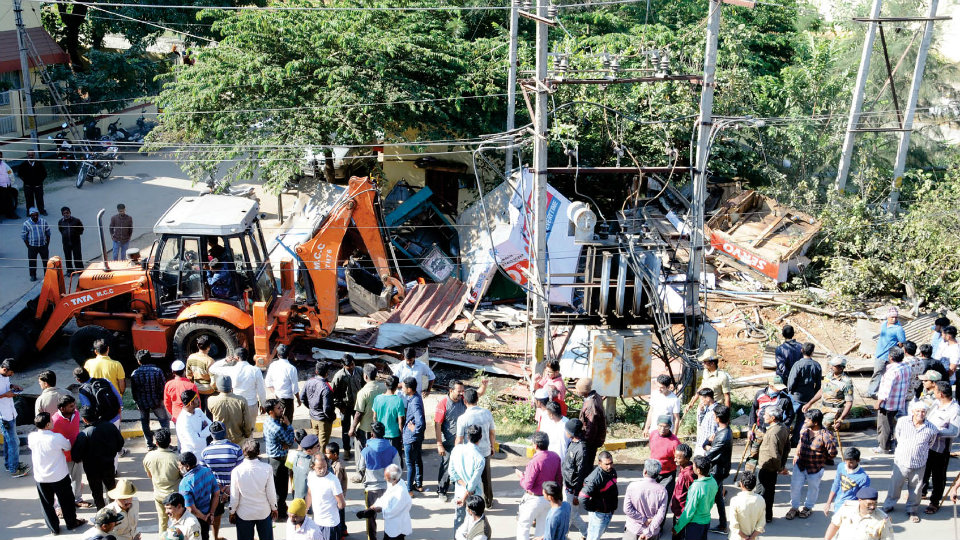 MCC clears over 300 encroachments in Bannimantap

Mysuru: The Mysuru City Corporation (MCC), which has taken up a drive to clear footpath encroachments in various parts of city, has pulled down over 320 encroachments on Hanumanthanagar Main Road in Bannimantap here this morning. Armed with five JCB machines, tractor and trailer, 40 gang men, led by MCC Assistant Commissioner Mahesh and Development Officer Srinivas, cleared the footpaths on the main road.

Following complaints from public, MCC Footpath Encroachment Clearance Drive teams cleared encroachments in Bannimantap today and the drive would be conducted at other locations of the city also.

Apart from Enforcement, officials and staff were drawn from Town Planning, Urban Community Development and Engineering wings of MCC. Traffic and Law & Order Police too took part in the operation.

Speaking to SOM, MCC Commissioner K.H. Jagadeesha said that the drive has been taken up to make the city more pedestrian-friendly. Pedestrians are facing untold misery owing to lack of footpath space, he added.

The drive, which began in the wee hours of the day, continued till 12 noon. A posse of 80 Police personnel were deployed for security and traffic was also diverted on the said stretch.