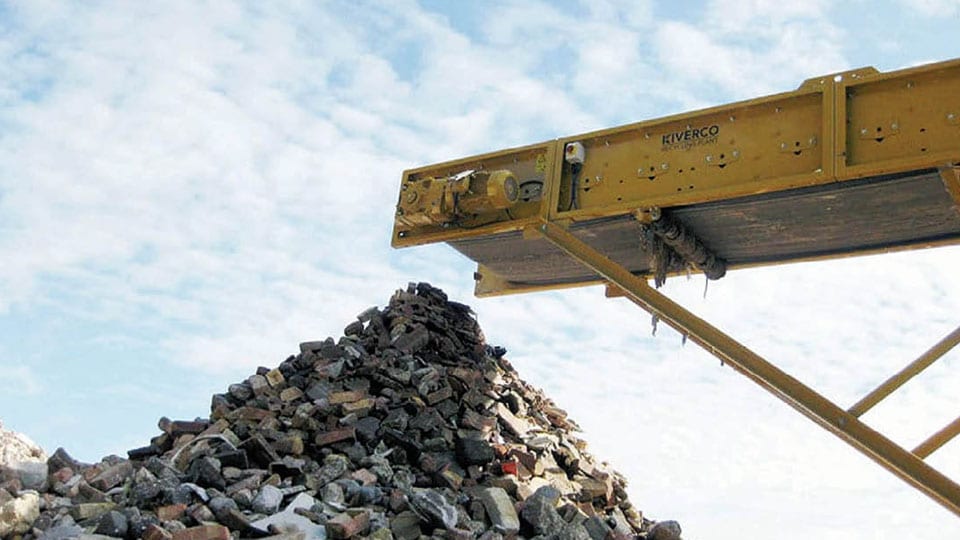 Mysore/Mysuru: Mysuru’s garbage problem is well-known but another crisis is growing in scale without attracting the same level of scrutiny or outcry. Thousands of tonnes of construction and demolition waste is illegally dumped at open sites, along the ring road, street corners and also on lake-beds.

Mysuru City Corporation’s (MCC) efforts to streamline the disposal of this type of debris, which carries the classification of “Construction and Demolition (C&D) waste”, have proved ineffective so far as debris continue to be dumped. Facing an uphill task of clearing thousands of tonnes of C&D waste, the MCC is now collaborating with Builders Association of India (BAI) to set up the most advanced C&D Waste Recycling Plant.

This was revealed by MCC Environment Engineer Madhukar at the monthly meeting of Mysore Grahakara Parishat (MGP) in city recently.

“Dumping of construction debris is a big issue in less populated places and on ring roads. Making recycling difficult, it is usually mixed with municipal solid waste. A Plant for construction and demolition waste will come up shortly in Mysuru in collaboration with BAI,” he said.

“As per a survey, everyday Mysuru generates over 150 tonnes of C&D waste. People carry such waste in trucks and dump them under the cover of darkness. The dumping usually is carried out in less-populated areas and on the Ring Road. It is difficult to identify such people and bring them to book. If the required approvals are received, the city will have a C&D Waste Plant in six to seven months,” he added.

Residents who undertake renovations at their properties face problems with storing and transferring construction waste. Most people use the services of tractor and truck owners, who don’t follow rules, charge high rates and get rid of rubble  unscientifically.

It may be mentioned here that the MCC had notified Koppaluru on the Ring Road behind lorry terminal in 2017-18 as the place to dump debris.

Also, last year, the MCC had floated a proposal to set up the most advanced C&D Waste Recycling Plant at 5.5 acres of land near Koppaluru village with zero investment by having an understanding with Mumbai-based IL&FS Environmental Infrastructure and Services Limited (IEISL), a subsidiary of Infrastructure Leasing and Financial Services (IL&FS).

The company was to set up this Plant purely on Private-Public Partnership (PPP model). Except land, MCC would not invest any money and IEISL would manage the Plant on BOOT (Build, Own, Operate and Transfer) model. The proposal, however, did not materialise so far.

Confirming about C&D Waste Plant coming up in city, BAI State Secretary N. Subramanya told Star of Mysore that the BAI is collaborating with the MCC on setting up the Plant. “We have the plan ready and we are awaiting necessary approvals,” he said.

Already, many private builders have set up their own C&D Waste Treatment Plant where the debris is crushed to form strong blocks and hollow bricks. “The BAI Kerala unit has set up such Plant in the neighbouring State where the waste is crushed, washed and used to make ready-mix concrete, kerb stones, cement bricks, pavement blocks and hollow bricks and manufactured sand. We are following the same model in Mysuru,” Subramanya said.

“Such a Treatment Plant will be beneficial to the builders, MCC and the environment. Not only does the Plant reduce the load at landfills, it is also better for the environment. Builders can buy the products made at the Plant once standards have been put in place,” he added.