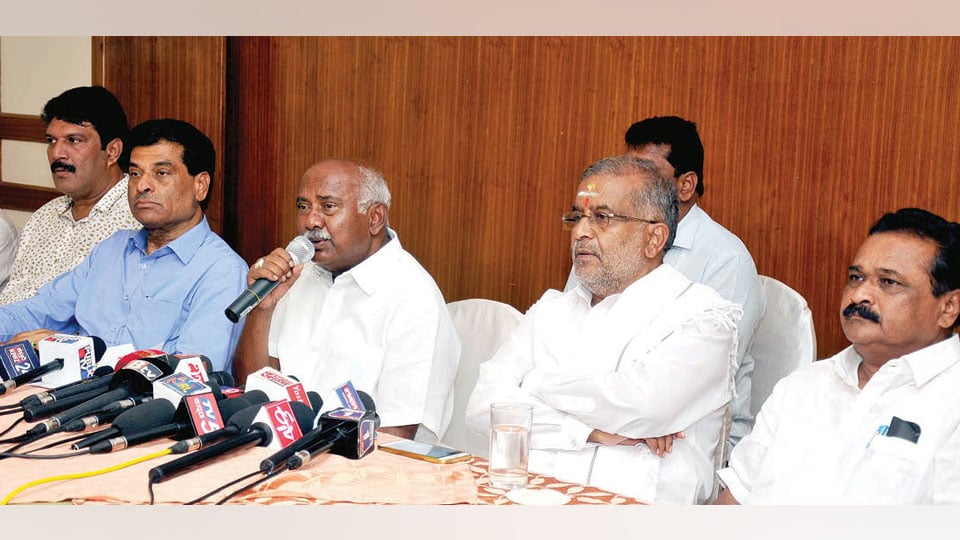 Addressing a press meet at a private hotel here yesterday, Vishwanath, explaining the limitations of a coalition power set up in the City Corporation, maintained that the JD(S) was the best option for the electorate, as the party is quick in addressing issues appropriately. He also underlined the need for converting MCC to Bruhat Mysuru Mahanagara Palike (BMMP) on the lines of BBMP, by bringing the cluster of villages around the city into the MCC fold.

Stressing on the need for establishment of an Exclusive Dasara Authority, he highlighted the need for making Dasara Exhibition Grounds a hub of expositions on all 365 days of the year, as it will be a big boost for the Tourism Industry.

Referring to Kodagu floods, Vishwanath demanded for a Co-ordination Committee meeting of the coalition Government to discuss the issue.

Maintaining that the Co-ordination Committee should have JD(S) and KPCC Presidents on board, Vishwanath, however, said that it was left to the National JD(S)  President and the Chief Minister to decide on the matter.

Reacting strongly to former CM Siddharamaiah’s claims that the JD(S) would not come to power in MCC polls, Vishwanath reminded the former CM of his past when he was in the JD(S) and served as a Minister and Deputy Chief Minister.

Replying to a question on Agriculture Minister Shivashankar Reddy’s statement on change of Chief Minister, Vishwanath said the Co-ordination Committee has been formed to strengthen the coalition government and not to destroy it.

Reacting to reports on flood ravaged Kodagu, the JD(S) President said that media was creating a scare by falsely reporting that Kodagu has been submerged. Although Kodagu has been ravaged by floods, it is not true that Kodagu has been completely submerged, he said and called for concerted efforts of the Government, Organisations, the media and all others in re-building Kodagu.

Mysuru District in-charge Minister G.T. Devegowda, highlighting the achievements of coalition Government, appealed the voters to cast their votes in favour of JD(S) candidates in the MCC polls.

3 COMMENTS ON THIS POST To “MCC Elections: Vishwanath appeals voters to give full majority to JD(S)”