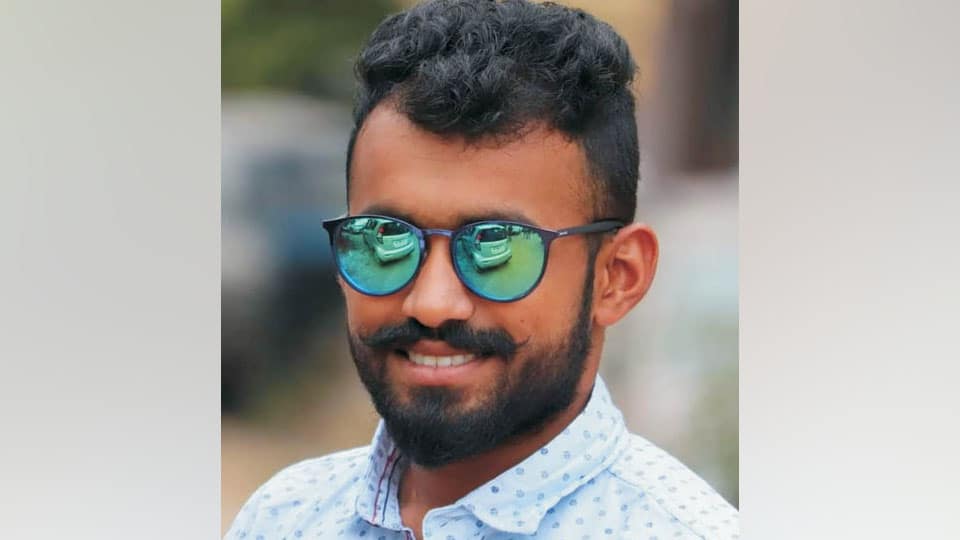 Mysuru: Buying a car is the second largest event after buying a house in India for almost every family. Buying a new car is sometimes not affordable and sometimes not advised. So, people start investing their time and money in finding great deal on used cars. But many times, buying a used car leads to fraud — like this youth who blindly trusted his acquaintances and ended up being cheated.

A complaint (General Petition No. 206/2018) has been filed at Saraswathipuram Police Station in city on Aug.23 by M.M. Koushik, son of M.N. Monnappa of Doddahosur village, Periyapatna, alleging that C.P. Likith (In the above Pic.), a second-hand car dealer, and his friend Pranitha have cheated him of Rs.2,65,000 and sold him a car whose engine broke down the very next day of purchase. He has told the Police that though Likith and Pranitha had taken back the car, the money has not been refunded nor an alternative vehicle was delivered.

In his complaint, Koushik, who runs a tattoo studio, has stated that Likith is a resident of Guddehosur village in Kushalnagar and used to deal with second-hand cars. His female friend Pranitha is a resident of Ramakrishnanagar in Mysuru and the trio knew each other very well. Koushik has stated in his complaint that he wanted a second-hand car and he approached Likith earlier this month.

Likith and Pranitha promised Koushik to deliver a good car and accordingly, showed him (Koushik) a Bengaluru-registered Volkswagen Polo car (KA-51 MB-1900). The car was shown to Koushik near Saraswathipuram Bake Point Circle.

After accepting the full payment, both Likith and Pranitha delivered the car on Aug.8. But the very next day, the car’s engine broke down while Koushik was on the move in Mysuru and he was not able to move further. When he consulted a mechanic, he told Koushik that the vehicle was not in a good condition and had engine seizure issue.

Koushik later called Likith and Pranitha and they promised to take back the car with faulty engine which they accordingly did. Koushik has stated in his complaint that despite returning the vehicle, his cash was not returned as promised by the duo to refund immediately or give him an alternative vehicle. He stated that both were not responding to his calls despite his many meetings with them.

Saraswathipuram Police, who have registered a General Petition, have issued an acknowledgement to the complainant. Further investigations are on.