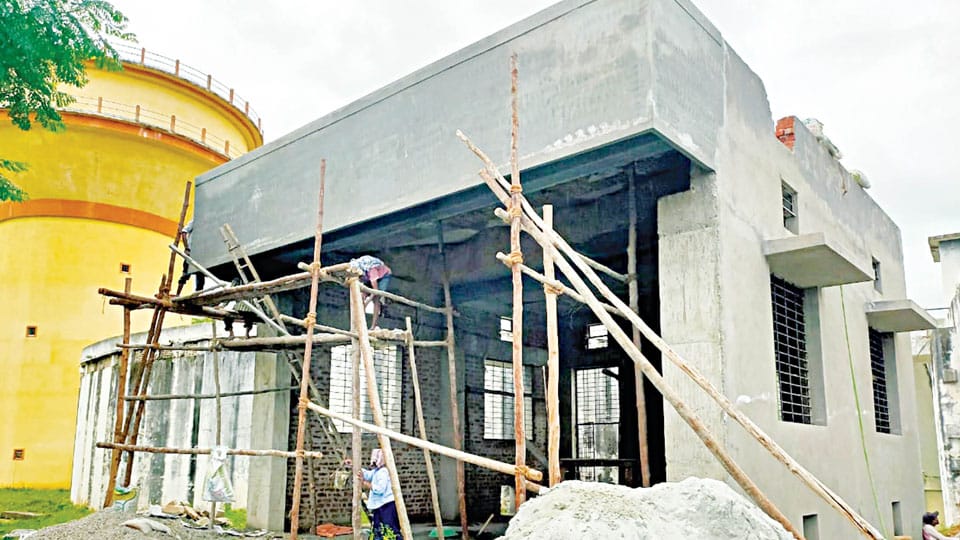 Mysore/Mysuru: In a bid to ensure potable water to all localities of the city coming under the Corporation limits, the MCC has started installation of Vacuum Feed Chlorination Plants at all its water storage and treatment units in and around the city.

Earlier, Gravity Feed equipment were used for mixing chlorine with water. But now, the latest Vacuum Feed equipment is being installed for better chlorination of water. These equipment are also said to plug any chlorine leakages in the process.

The first vacuum feed equipment which was installed at Pinjrapole, is now adopted in Kuvempunagar plant at a cost of Rs.16.60 lakh and all other plants, with only cost being the difference. The plant at Yadavagiri has cost the MCC Rs.18.60 lakh, Kembalu- Rs.20 lakh (2 units), Rs. 34 lakh at Hongalli, which also includes construction of  Chlorination building and Devanur at Rs.15 lakh.

The Vacuum Feed equipment has a regulator for regulating the flow of Chlorine, thus reducing the risk of any chlorine gas leakage.

VVWW AEE Mohammad Mustafa said that the installation of Vacuum Feed equipment will largely eliminate the risk of  leakage of Chlorine gas, which is hazardous for the health of human beings. Pointing out that an understanding has been entered into with a few private organisations with regard to  imparting training on handling the equipment, he said that the training includes all aspects such as replacement of empty cylinders, determining the water level, controlled flow of Chlorine gas, mixing with water etc.,

Continuing, Mustafa said that the Chlorine gas cylinders are sourced from Andhra Pradesh based Southern Chemicals, which has manufacturing plants at Kurnool and Rajahmundry. The units need 30-35 cylinders a month, he said adding that though the latest and most advanced chlorination plants which use Chlorine Dioxide, cost Rs. 2 crore, the MCC taking note of its limitation and budgetary allotment, has for now decided to install equipment that costs Rs. 10-15 lakh on an average.

Mustafa further said that water, before being supplied for public consumption, will be tested for any impurity at the VVWW testing lab and the lab at Kembalu water treatment plant. The water will be tested for pH quantum, Chloride-Fluoride and Bacteria content, hardness, turbidity and the like.