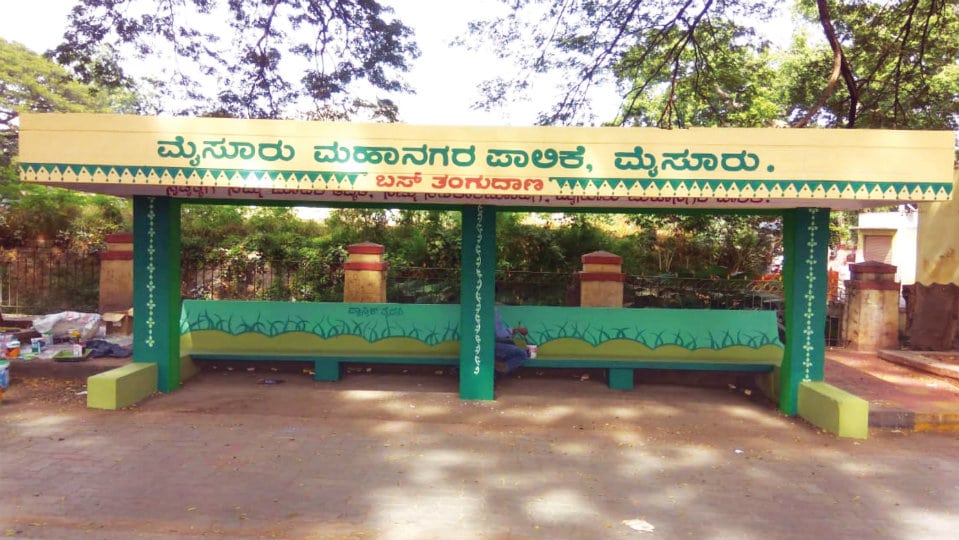 Mysuru City Corporation (MCC) Commissioner K.H. Jagadeesha said that beautification of bus shelters located in various parts of the city has been taken up as part of Swachh Mysuru, Hasiru (green)Mysuru campaign.

CC) Commissioner K.H. Jagadeesha said that beautification of bus shelters located in various parts of the city has been taken up as part of Swachh Mysuru, Hasiru (green)Mysuru campaign.

He said that the MCC had received a lot of complaints from public that some bus shelters that have been constructed outside Central Business District, other than arterial roads looked ugly and adorned with graffiti and have become a hangout for stray animals, street vendors and some anti-social elements.

Many of these bus shelters were constructed by MLA Local Area Development Funds, MUDA, MCC and other private organisations. The MCC has not yet surveyed the exact number of locations of bus shelters.

“After I took over as Commissioner, I have hired painters to give a new look to bus shelters by featuring messages to sensitise the public to keep city clean, to end open defecation, plant trees on vacant plots and roadsides to enhance green cover,” he said.

The MCC is spending Rs. 5,000 to paint each bus shelter. Work on painting walls on arterial roads and bus shelters with colourful paintings and drawings was initiated during Dasara celebrations. “Many private sponsors have voluntarily come forward and have provided painting material and some of them have even funded the artists, he said.

No plans to hand over bus shelters to advertisers

Though there were plans to hand over the maintenance of bus shelters to private companies and advertisers, MCC shelved this idea as there is a clear-cut advertisement policy. The MCC has now initiated the work to draft a new advertisement policy, Jagadeesha said.

The MCC is set to launch an intra-city contest titled ‘Swachh Mysuru’ to ensure cleanliness ahead of next year’s Swachh Survekshan.

The objective is to pit wards and different MCC zones against each other in a race so that there is a concerted drive by locals and councillors to ensure cleanliness in public spaces.

Besides, there will be norms for institutions such as hospitals, schools, bus stands and environs surrounding places of worship. They will be ranked on a set of parameters including disposal of solid and wet waste after segregation, practices adopted for bio-medical waste, and presence of toilets and eco-clubs in schools. The list of parameters will be announced soon, Jagadeesha added.

The MCC has been making efforts to reach out to citizens through schools and Resident Welfare Associations. “Despite this, waste is being indiscriminately dumped near bus shelter and street corners. “We will levy if people are found littering and dumping garbage in open spaces and bus shelters. If need be, we will seek Police assistance in offenders,” MCC Commissioner said.

“Just as smoking in public places draws penalty, we want the Police to act on littering as well. They should be empowered to levy fines at their respective station levels,” K.H. Jagadeesha felt.