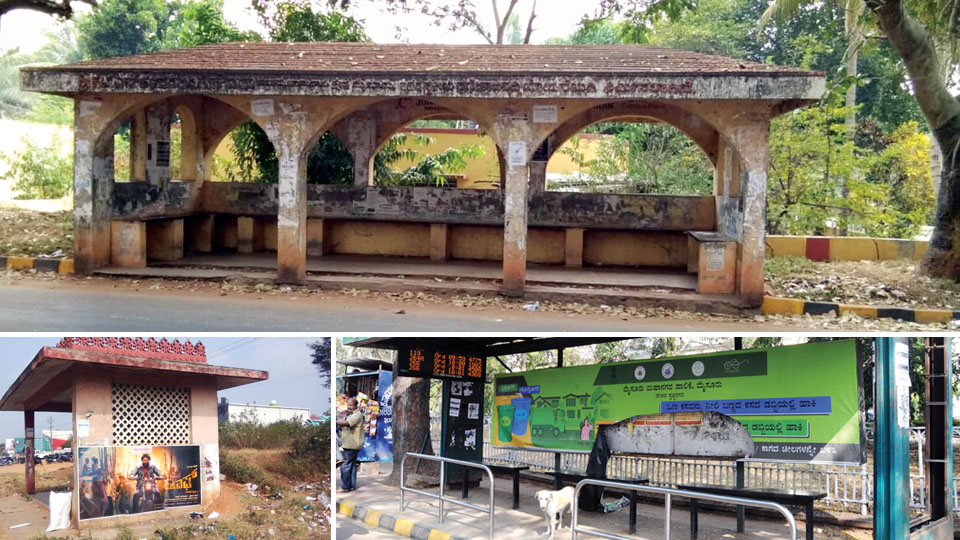 Bus riders are always at risk of getting caught in rain or dealing with blistering heat and freezing cold. They pay taxes like everyone else and they deserve basic infrastructure. Unfortunately, many bus shelters in Mysuru city are in a dilapidated state and filled with muck, cow dung and walls adorned with graffiti. They have been turned non-functional and their benches are all corroded or broken while buses stop at make-shift stops metres away from them or on the middle of the road. So, literally bus shelters are missing the bus or missing an opportunity to be a part of a good public transport system. While some bus shelters are getting a facelift, many others are desperately crying for attention as featured in this Weekend Star Supplement.

Space for ads but not for people

A bus shelter is a designated place where buses stop for passengers to board or alight a bus. They are an absolute necessity for any successful transit service. However, bus shelters particularly at most of the old bus stands in Mysuru city are dilapidated and regarded as a waste of space.

The city which has more than two lakh houses and a population of over 14 lakh is developing rapidly in all aspects and there are over 200 bus shelters spread across its length and breadth.

Of these, over 120 bus shelters have been given a hi-tech touch by Karnataka Road Transport Corporation (KSRTC) and they are equipped with route displaying LED screen boards, sophisticated backlit panels, seating, lighting arrangements and other facilities for commuters under Intelligent Transportation System (ITS) programme funded by JnNURM scheme.

Sadly, most of old bus shelters which were constructed by Mysuru City Corporation, Mysuru Urban Development Authority and the ones constructed by District administration under MP and MLA Local Area Development Fund are in a neglected state.

Many bus shelters that were built two decades ago are either occupied by stray animals or have been turned into garbage dumps. Residents complain that authorities have not played active role to tackle this issue.

Election posters and graffiti adorn pock-marked walls of many bus shelters while spittle and cigarette stubs clutter the floor.  People-friendly shelters have fallen prey to anti-social elements and those who used it after regular hours.

“I usually leave for home from work at around 7:30 pm and use this bus shelter to take a bus. While waiting for the bus, we have to sit in dark as there is no illumination. The only source of light is from the headlamps of vehicles that pass by,” says Chandana, a resident of Vijayanagar who was waiting for a bus near Hinkal bus shelter on Hunsur Road.

A majority of bus shelters do not have bus bays. Buses stand right on the middle of the road, blocking traffic and endangering the lives of the people, especially in crowded places. Many bus shelters on arterial roads are used by street vendors after regular hours for sleeping.

Ideally, bus stops are meant for the ease and comfort for commuters. Here, they are inconvenient and at the same time increases the risk of road accidents as commuters are forced to stand on the roads due to the pathetic state of some of the shelters.

In order to encourage more and more people to use public transport, it is vital to provide good bus shelters. However, most of the bus shelters are rusted, roofless and poorly lit, posing a threat to commuters.

Rashmi from Yelwal, a garment worker and regular bus commuter says that barring city’s core areas, bus stops elsewhere are broken or rusted. “Bus stops in places inhabited by the affluent are in a good condition but that’s not the case elsewhere. In many areas there is no shelter with people taking refuge under trees. For many young women, these bus stops are unsafe where they are at the risk of facing harassment,” she said

Authorities must take proper measures to renovate old bus stops as they are lying in a dilapidated condition. Traffic is getting more and more chaotic with each passing day, so proper bus stops should be made for the comfort of daily commuters, she added.

However, a few bus shelters are getting a face-lift to provide a modern look. The Mysuru City Corporation (MCC) is trying to create awareness among people about cleanliness, water conservation and increasing green cover by getting some of the old bus shelters painted with messages on Swachh Bharat issues like the bus shelters on Chaduranga Road near SJCE Campus, Hinkal, Ramakrishnanagar, Kuvempunagar, Siddarathanagar and Alanahalli. This apart, inside the bus stops there are messages which warn people not to paste pamphlets on the walls.

There is a lapse here too. Lokesh, a painter hired by the MCC, said that he had been painting bus shelters and walls as commissioned by the MCC since the last seven years. “I have painted the walls along with my friends at City Railway Station, Mysuru Zoo and arterial roads last Dasara. The MCC has promised to pay Rs. 5,000 to paint the each bus shelter, So far, I have painted more than eight bus shelters including  Ramakrishnanagar Circle, Siddarathanagar, Hinkal and other places but the MCC has not yet cleared dues despite assurances from the commissioner. It is difficult to eke out a living due to pending dues,” he said.

Bus shelters that stand out