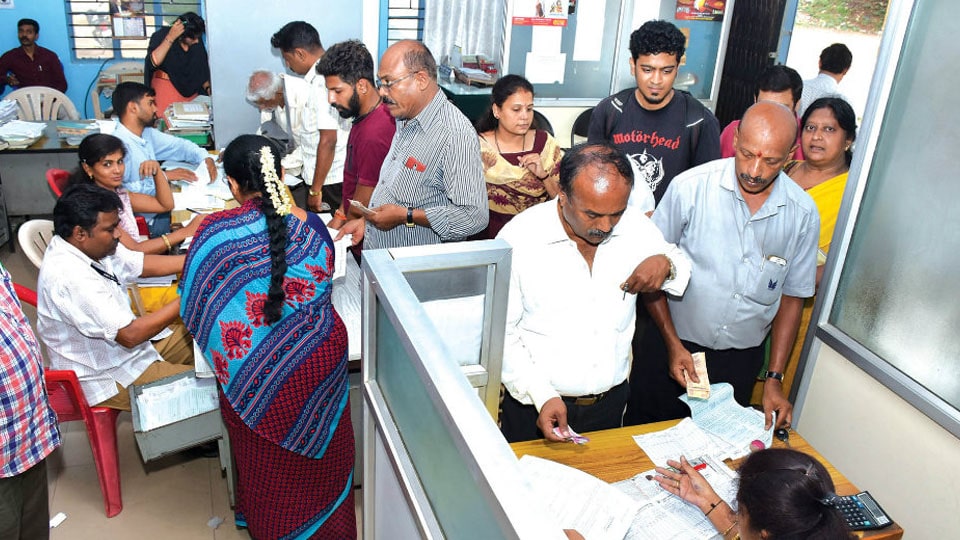 Mysuru: If you have not paid your property tax, then the Mysuru City Corporation (MCC) will pull the fuse of your house to disconnect power supply and also stop domestic water supply. Desperate to mop-up revenues, the cash-strapped City Corporation is resorting to desperate measures during desperate times.

Realising that its revenue collection drive is not up to the mark, the MCC, often criticised as its tax collection target is always pegged way below its actual potential, has decided to take punitive action against defaulters.

Property Tax and Water Tax default is a major problem that is faced by the MCC and as there is no enough revenue, it cannot plan any project to the city and always has to look forward to grants from the Government. Contractors are not co-operating with the civic body to initiate new projects as bills of several other works done in the past have not been cleared.

In another move, the MCC has intensified the property tax collection drive by constituting special recovery teams in all the nine Zones. As per the powers granted to it under Municipal Corporations Act 1976, the MCC has decided to effectively implement tax collection drives and accordingly, one Nodal Officer has been appointed for each Zone who will report directly to the MCC Commissioner.

He further said that the team would first try to recover the property tax dues from the defaulter failing which power, water and UGD connections would be disconnected followed by legal steps to attach the property. He added that the entire operation would be monitored by the MCC Commissioner.

There are 80 government buildings within the MCC limits that have a huge backlog of taxes. “We have taken steps to effectively collect taxes and notably, on Dec. 23, we have collected Rs. 82 lakh from the owner of Mysore Hotel Complex on Bengaluru-Neelgiri Road, who had a tax backlog since the last three years,” Kumar Naik said.

Interestingly, soon after the drive was launched, a hotel owner who had over Rs. 8 lakh tax dues, paid up on the spot when MCC officers knocked at his doors as part of the drive.

Several property owners paid half of their property tax to the officers and promised them to clear the dues soon.

For those who have not paid property tax so far due to some issue with the property, land or the building, MCC officers are providing on-the-spot solutions. Officers from all the 9 Zones of the MCC have prepared a list of defaulters and are visiting each house with the list and urging residents to pay their taxes.

According to MCC Commissioner Gurudatta Hegde, the MCC will disconnect water and power supply if they don’t oblige and pay taxes.

“Action will be taken as per the provisions of Karnataka Municipality Act. All the officers have been instructed to strictly collect the dues and shore up revenues,” he added.

The quality of services provided by the MCC is deteriorating despite increase its budget size, the major portion of it that came in the form of government grants and not from the taxes collected. But for liberal grants by the Government, the services would have been even worse.