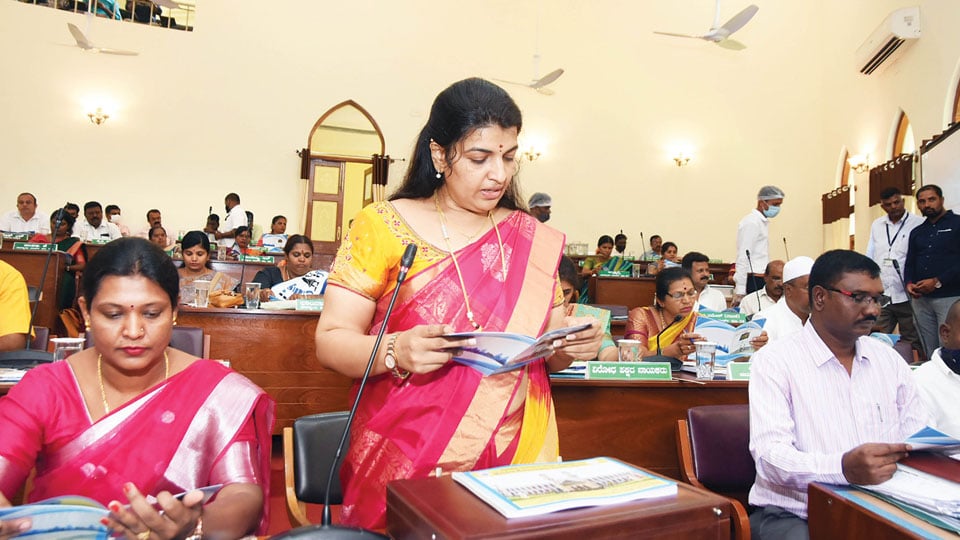 Mysore/Mysuru: Chairperson of Standing Committee on Taxation, Finance and Appeals, M.S. Shobha created a history of sorts today by becoming the first person in the history of Mysuru City Corporation (MCC) to present the budget for the second time in a row.

This year, however, the Mayoral term ended on Feb. 24 and as the State Government is yet to announce the reservation matrix, the elections are delayed. Non-presentation of budget would have led to delayed payment of salaries and other expenditure and also would have put a spanner in development works. In this scenario, the Urban Development Department permitted the Chairperson of the Standing Committee on Taxation, Finance and Appeals to present the budget.

The MCC has taken certain eco-friendly initiatives and Miyawaki Park is one among them. The Miyawaki method would be adopted in all the parks within the MCC jurisdiction where native saplings will be planted.

To curb pollution, MCC plans to start electrical auto tippers to collect and transport e-waste from door-to-door and initially five vehicles will be purchased.

Another major announcement is the construction of MCC Bhavan that will save money as at present, all MCC events are held at rented halls. MCC Bhavan will have hi-tech features and Rs. 5 crore has been set aside.

Keeping in mind the bad condition of roads, a new pothole-filling machine will be bought for immediate repairs. Rs. 5 crore has been earmarked for this.

Due to non-availability of space at MCC head office for public to park their vehicles, the existing petrol pump will be relocated and three pumps will be constructed at Rayanakere, Kesare and Sewage Farm. Also, service stations will be set up at the three places as all the MCC vehicles can be repaired there, along with parking facilities.

Rs. 5 crore has been set aside to widen and develop the road from Shanthaveri Gopalagowda Circle to Dairy Circle. Also, the Theobald Road will be widened and the Circle at the junction of Krishnaraja Boulevard and New Kantharaj Urs Road will be comprehensively developed.

The MCC will construct an international skating rink at Vijayanagar Second Stage in 1,600 sq.mts MCC land and Rs. 3.5 crore has been reserved for this. The Kempegowda Stadium at Kumbarakoppal will be developed at a cost of Rs. 2 crore. A sports arena that will have facilities for football, tennis, basketball, badminton and cricket will come up at Chamundeshwari Assembly Constituency.

A new stadium will come up at Narasimharaja Constituency at the playground behind Narayana Hrudayalaya and Rs. 2 crore has been reserved.

Another stadium at Kuvempunagar K. Block will be developed at a cost of Rs. 2 crore.

The Devanur Lake will be developed at a cost of Rs. 2 crore and the Lake will be rejuvenated along with Mysuru Urban Development Authority (MUDA).

To streamline the revenue of drinking water supply, revenue management software will be developed to switch over from the current billing system.

A Yoga Mantapa will be built at Dr. Rajkumar Park on Albert Victor Road as part of the late thespian’s birth anniversary. Dr. Raj was an ardent practitioner of Yoga and the Yoga Mantap will spread this message.