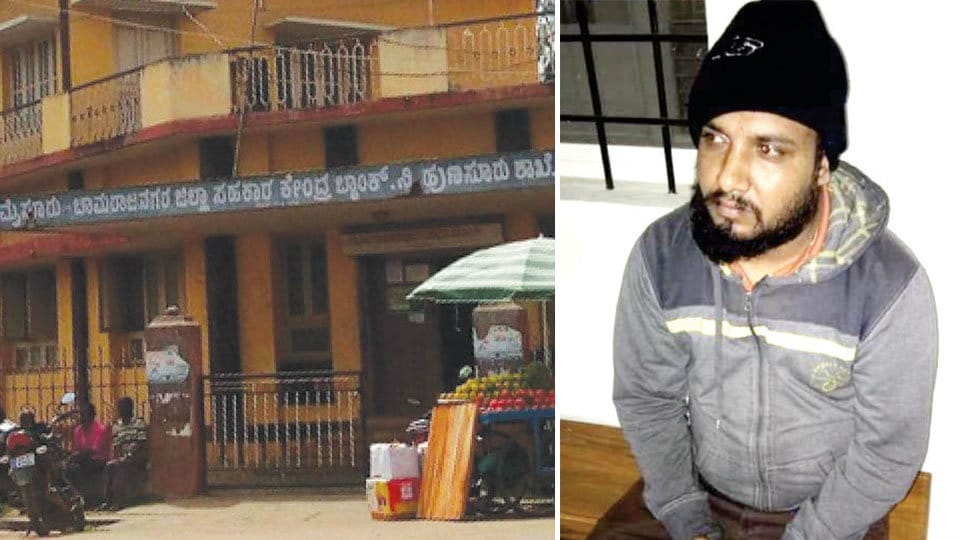 Ramappa had allegedly misappropriated crores of rupees meant to be distributed to poor farmers and was hoodwinking the Police by frequently changing his place of stay which had become a challenge to the Police. As he used to change his place not only in various places across the State but also in other States, the Police had a tough time tracing him and by the time the Police collected information of his place of stay and go there, Ramappa used to vacate the place, sources said.

A team, led by CID Dy.SP Sandesh Kumar was formed and after obtaining information that Ramappa was staying in Bengaluru, the CID team, without wasting any time, rushed to Bengaluru and nabbed Ramappa. He was produced before a Court and the CID, which took the accused into their custody for a few days to conduct interrogation, brought him to Bilikere and Hunsur branches of the Bank yesterday and conducted enquiry.

As soon as the news about Ramappa being brought to the Bank by CID sleuths spread, hundreds of farmers gathered in front of the Bank and a few farmers tried to get near Ramappa but were prevented by Hunsur Police, who provided tight security.

Sources said that Dy.SP Sandesh Kumar-led CID team, which has intensified the investigation has collected vital information and has instructed the CEOs of all Co-op. Societies coming under MCDCC Bank’s Hunsur Branch to be present for enquiry.

The Scam: MCDCC Bank provides loans to farmers through Co-op. Societies coming under it and accordingly, the Bank had sent money to its branches in Hunsur and Bilikere. But Ramappa, who was the then Manager of the Hunsur Branch, misappropriated a total of Rs.48,75,53,206 (Rs.27 crore of Hunsur Branch and Rs.13 crore of Bilikere Branch) by transferring the money to his account.

As soon as the information about the money being misappropriated came to light, the then General Manager (GM) of the MCDCC Bank formed an investigation team and during enquiry Ramappa’s fraud came to be known and the GM began to initiate action against Ramappa.

On Sept. 26, 2018, during the Bank’s Annual General Body Meeting, there was ruckus pertaining to the scam and the then Bank Director G.D. Harish Gowda, who is now the President, demanded that the scam be handed over to CID and was successful in it.

The case was transferred to the CID and the CID, which took up the investigation, traced the location of Ramappa Poojar to Bengaluru and finally arrested him.