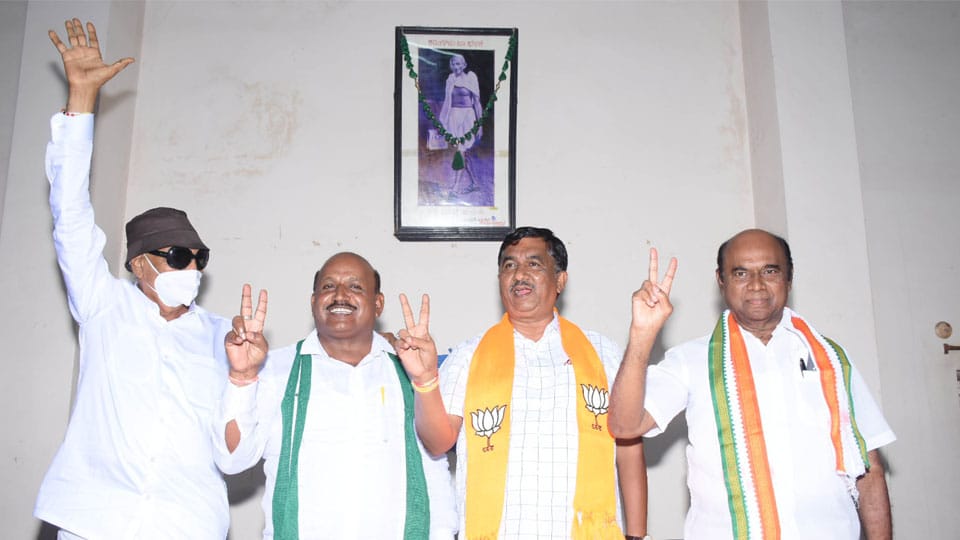 Mysore/Mysuru: The interaction meet with media persons organised by Mysuru District Journalists Association (MDJA) at Pathrakarthara Bhavan on Thyagaraja road in the city this morning, saw the candidates of all the four parties for the polls to the dual-member Mysuru-Chamarajanagar seat from Local Authorities Consituency — BJP, Congress, JD (S) and Kannada Chaluvali Paksha — promising more funds for Gram Panchayats and a hike in honorarium for its members, who form a majority of the electorate in this poll.

The interaction was held a week ahead of the polls to take place on Dec.10.

The ruling BJP candidate Raghu R. Kautilya said that he has been in politics since the days of Gokak movement four decades ago, as a teenager then. Asserting that he would continue the good work of Prime Minister Narendra Modi and former Chief Minister B.S. Yediyurappa, he said that his main focus would be empowerment of Gram Panchayats (GPs), which are the roots of democracy.

Assuring that he would strive for Rs.10,000 monthly honorarium for every GP member, he contended that no MLC who was elected in the past from this Constituency, had raised their voice in the Legislature for the cause of Gram Panchayats and its members.

Maintaining that he would be most vocal for the development of GPs, he announced that he has the concept of ‘Nanna Ooru Namma Udyoga’, which envisages setting up of Skill training centres in every GP.

Asserting that such centres would largely help in checking migration of rural youths to urban areas in search of jobs or livelihoods, he re-iterated that he was totally committed for protecting the interests of GP members. Raghu also promised free bus pass, mobile phones, subsidised two-wheelers, health and life insurance cover for all GP members.

Highlighting the achievements of the BJP Governments at the Centre and the State, he said that he will strive for getting more funds under contingency plans for executing infrastructure works in all GP limits.

Dr. D. Thimmaiah of the Congress, who was the first to interact, said that he had served the Health Department in various capacities for 32 years. Noting that he joined politics post his retirement over 15 years ago in order to serve the people more, he said that he was greatly inspired by the works and welfare measures of Siddharamaiah, who headed the Congress Government earlier.

Listing the achievement of Siddharmaiah, he said that schemes such as Anna Bhagya, Ksheera Bhagya etc., establishment of schools and colleges, construction of a cluster of Hospitals on KRS Road and construction of the new DC’s Office complex in the city, are all the works of the Congress Government, which nobody can deny. He further said, if elected, he would honestly work for further  empowerment of  Gram Panchayats, which form the root of our democratic system.

Pointing out that the dual-member Mysuru-Chama-rajanagar seat has an electoral strength of about 6,600 voters, he asserted that he was very much hopeful of winning in the first round itself as over 4,000 of Gram Panchayat members were elected with Congress support.

JD (S) candidate C.N.Manjegowda  said that as the President of Srirampura Gram Panchayat earlier, he had turned the GP into a model one. Highlighting his achievements as a GP Member and President, he said that his primary focus would be to bring more Government funds to all GPs under a special plan.

Arguing that there is discrimination in sanction of grants for GPs, Manjegowda said, while GPs close to cities and towns, were getting more funds, those in the hinterland  and interior parts are getting less funds. Assuring to end this discrimination, he said that he would exert pressure on the Government to release Rs.10 lakh per year for every GP member for carrying out developmental works.  Stating that he is an ex-serviceman guarding the country’s borders, Manjegowda said that he would safeguard the inte-rests of GPs and members, just as he did for the country as an ex-serviceman.

Vatal Nagaraj of Kannada Chaluvali Paksha, said that he first become an MLA when S. Nijalingappa was the Chief Minster in the 1960’s. Maintianing that he has seen many Chief Ministers since the times of S. Nijalingappa, Kengal Hanumanthayya, Kadidal Manjappa, K.C.Reddy and D. Devaraj Urs, he said that he was a five-time Legislator. Noting that he was successful in only five out of the over 15 polls that he has contested so far, he said that he did not abstain from any Legislature session even for a single day when he was an MLA.

“The late  writer Patil Puttappa often used to say that any Legislature would lose its sheen in the absence of Vatal  Nagaraj”, he said.

Contending that the honorarium being paid to GP members is very low, he promised that he would fight till the Government announces a monthly honorarium of atleast Rs.5,000. Regretting the influence of money and muscle power in polls, he  said that he has made a pledge not to bribe the voters. He asked his three fellow contestants who attended  the interaction, to make a pledge that they would not bribe the electorate.

Dismissing Vatal Nagaraj’s suggestion and  refusing to make the pledge, the three other candidates said that the voters are not for sale and asserted that they are on a positive campaign, seeking votes on development and welfare issues.

MDJA President S.T. Ravikumar and General SecretaryM. Subramanya were present during  the interaction.