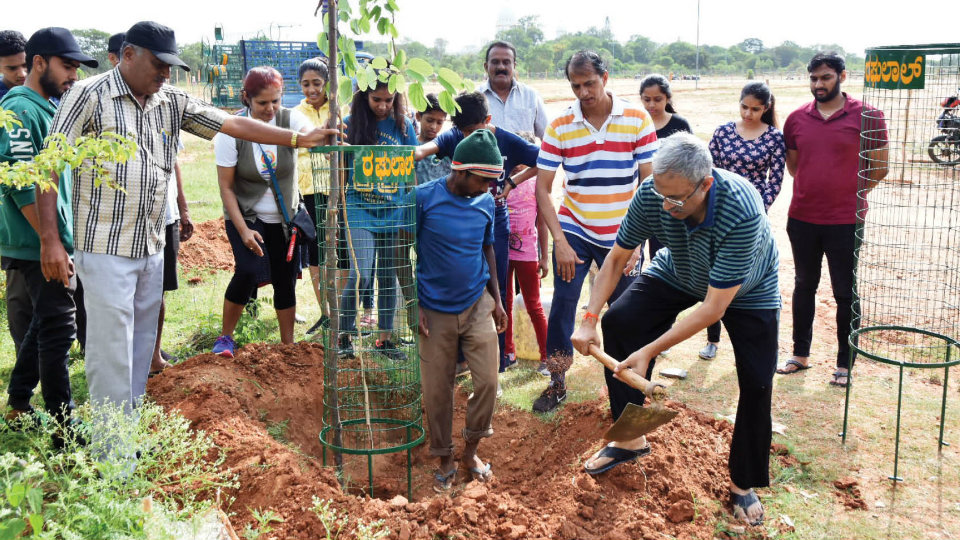 350 saplings to be planted in a week; Raghulal & Co. donates Tree Guards

Mysuru: In a bid to protect Mysuru from rising temperature and to conserve the environment of the Heritage City, a mega tree-planting drive was taken up in the surroundings of the helipad near Lalitha Mahal Palace Hotel in city this morning.

Raghavan, speaking to Star of Mysore said, “We should not expect the Government or the civic body to do everything. We should lend a helping hand as it is our city and it is our responsibility to protect the environment.”

He further said that with temperature soaring high and the city reeling under scorching heat, there is a need to increase green cover and hence the drive.

Raghavan has been doing service to society, especially in trying to preserve the environment in his own way for quite some years now by providing Tree Guards to protect saplings from cattle. The pharmacist has been giving Tree Guards as part of Raghulal & Co’s Corporate Social Responsibility (CSR). What started in a small way has now grown to such an extent that many individuals and organisations expect Raghavan to provide free Tree Guards. He has donated about 15,000 Tree Guards made of sturdy metal with wire mesh around it.