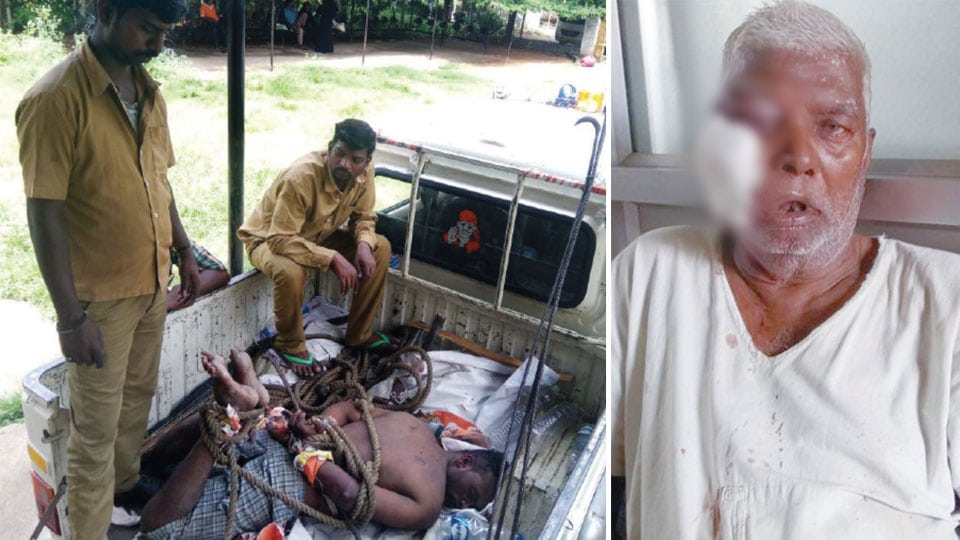 Mysuru: A mentally-deranged person created ruckus in city this morning by throwing stones at seven vehicles and injuring over eight persons. The Police and the public had a tough time in controlling the man who had a huge physique. Finally he was over-powered and hospitalised.

The incident occurred at around 8 am near the Srimanmaharaja Samskrita Pathashala Circle when all of a sudden a man threw stones at four moving KSRTC buses, one truck and two cars. The man was well-built and was speaking fluent English and Kannada and was running across roads, stoning the vehicles. Over eight persons sustained injuries and have been admitted to different hospitals.

After pelting stones, the man hit an 80-year-old Venkatappa Shetty from Saragur who was walking on a footpath. Shetty, who trades silk saree borders, had come to the city in a KSRTC bus from Saragur this morning.

As Venkatappa Shetty neared the Patashala Circle, he was hit with the stone. The stone barely missed his eyes.

Seeing the commotion, people gathered at the place tried to catch hold of the man but he proved too strong for them. Some two-wheeler riders parked their vehicles by the side of the road and attempted to catch him. Seeing people chasing him, the man assaulted a couple of them. A Traffic Constable, who tried to pull him too was injured as he was hit on his head.

The man later ran towards JSS Mahavidyapeeta. As he could not jump the compound, he squatted on the road, exhausted. The people, who were chasing the man used this opportunity to rein him in. He was overpowered and was beaten black and blue. One among the group brought a wooden reaper and beat him up, severely injuring his head, shoulders and neck region.

With much difficulty, the people tied his hands and legs with barbed wires and huge ropes. He was bundled into Mysuru City Corporation’s Zone-1 Abhaya vehicle. The Abhaya team was led by Manjunath. Inside the vehicle too, the man was struggling to free himself from barbed wires and ropes. His hands were finally tied back and were bounded to his legs so that he could not move.

On questioning, the man said that his name was Kusma Williams and he hailed from Bengaluru. In chaste English, he said he was upset about the rapes that are happening in India and came to Mysuru to inform authorities about 3,500 rape incidents. The mentally-deranged man being shifted to K.R. Hospital.

Kusma Williams was shifted to K.R. Hospital by the Abhaya team where he was left unattended for almost two hours. He was writhing in pain and was pleading to be freed. Despite pleas from the Abhaya team, nurses and doctors refused to attend the injured man. His wounds were not cleaned and he was lying inside the Abhaya vehicle, bleeding from his head.

Finally, he was shifted to the ward where mentally unsound people are treated. He was given an injection so that he could sleep. The ropes and barbed wires were removed and as per the latest updates, the treatment had begun.

As the injured Kusma Williams was shifted to the ward, people there, especially women, objected as their safety would be compromised. Several women told the Police that as the person was well-built and violent, they could face danger especially during night. They pleaded them to shift him to a secluded ward where he remains alone.

Doctors and nurses, however, convinced them that two Police Constables will be posted at the ward as additional security and the person has already been immobilised. They assured them that he would do no harm and there was no facility for a secluded ward.