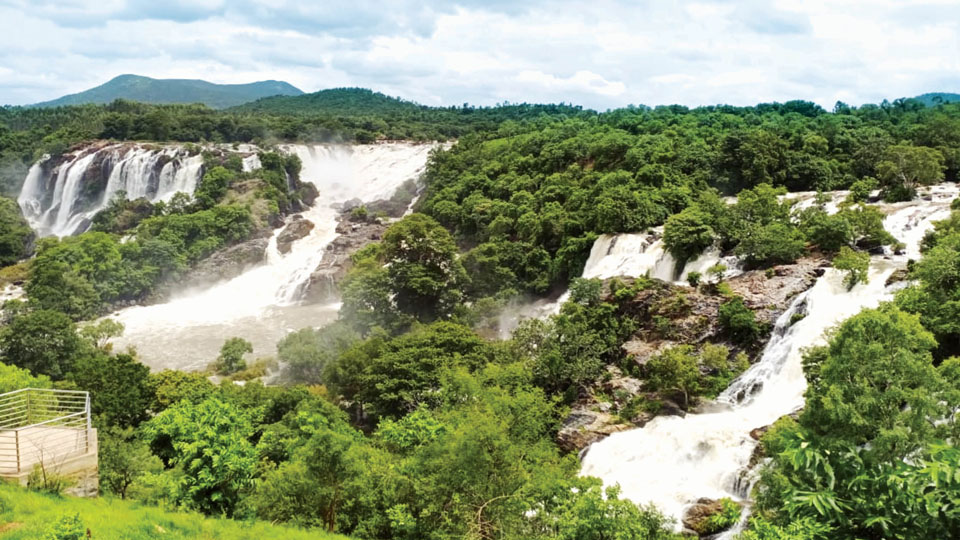 Mandya: Heavy discharge of water from upstream reservoirs like Krishna Raja Sagar (KRS) and Kabini Reservoirs has resulted in the famed Gaganachukki waterfalls in Mandya District and Bharachukki waterfalls in Chamarajanagar swell to its maximum amid the riot of green and the mesmerising misty veil.

The two branches of Cauvery River (eastern and western) flow through deep ravines on either side of the island before plunging into two different places a few kilometres apart to form the Gaganachukki and Bharachukki waterfalls. Both the waterfalls have sprung back to life regaining its splendour.

Gaganachukki and Bharachukki waterfalls are together known as the Shivanasamudra Falls (also called Bluff). While Gaganachukki is in Malavalli taluk of Mandya district, Bharachukki comes under the jurisdiction of Kollegal taluk in Chamarajanagar district.  If you are planning a visit to Gaganachukki and Bharachukki, the Forest Department has decided to block the entry of tourists. Though the Chamarajanagar District Administration has thrown open all the tourist sites as per the guidelines issued by the State and Centre, the Forest Department has banned tourist entry due to Coronavirus outbreak.