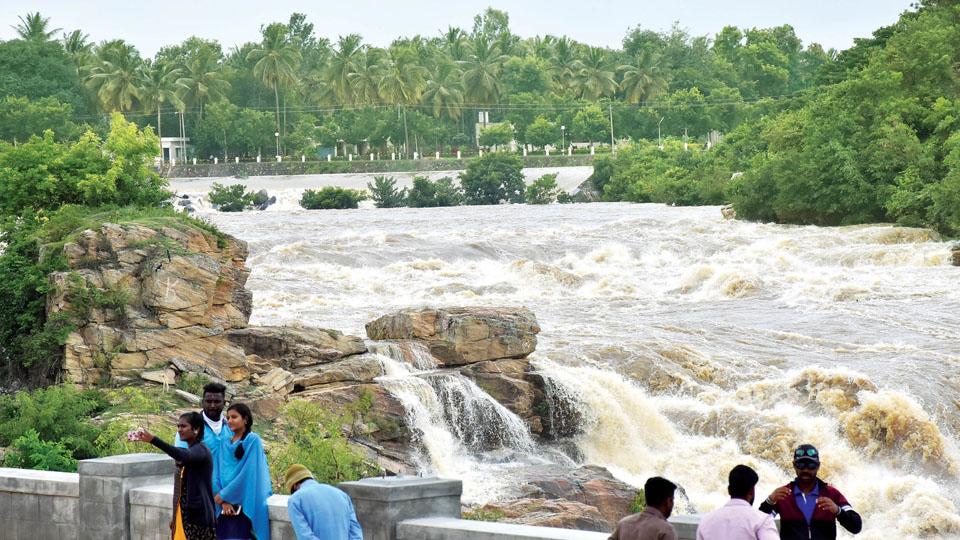 Mysore/Mysuru: Counted as one of the many gorgeous waterfalls in Karnataka, the spectacular Chunchanakatte Falls is attracting visitors from far and wide despite COVID-19 pandemic. Amidst the virus outbreak people are coming here in large numbers as if to take a break from COVID updates and spend some quality time with friends and family in the lap of nature.

It is a place where one can see nature’s bounty in full flow. The spot is also called Dhanushkoti waterfall, located at Chunchanakatte village near K.R. Nagar and it is around 55 kms from Mysuru. With heavy rains since the last one week in Kodagu, Cauvery, the lifeline for Mysuru and Mandya farmers, is in full spate and hundreds of tourists are visiting the spot to see the water gushing out like a giant river of milk.

Cauvery, which takes birth at Talacauvery in Kodagu, reaches KRS in Mandya District. Thanks to copious rains, more than 12,000 to 13,000 of cusecs of Cauvery water is being released on a day-to-day basis from Harangi Dam in Kodagu.

At Dhanushkoti, before the water reaches KRS, water falls from a height of more than 65 feet like milk foam and it attracts tourists in hordes. They capture the magical moments on their cameras and mobiles apart from clicking selfies.

Also, water flows with great force here as a private company produces electricity 300 metres away from Chunchanakatte Falls. However, while it is a splendid site to watch water falling from the heights in full force, venturing into the water is extremely dangerous and even boats get swept away due to sheer force.

Tourists are first visiting Anjaneya, Kodandarama and Seetha Devi Temples near the river banks and then going to watch the cascading waterfall. Legend says that there is a Seetha Devi ‘madu’ (whirlpool) at Dhanushkoti. During Ramayana, Seetha Devi used to take bath in this place and one day, Lord Ram’s brother Lakshman accidentally came near the place without realising that Seetha Devi is taking bath.

There is a small dam at a distance of seven kilometres from Dhanushkoti that was built in 1890 by Chamaraja Wadiyar. The dam was built for local villagers to carry out agriculture activities and it is in ‘U’ shape from one end of the river to the other end. The 750-ft dam is called Chamaraja Dam by the locals and this too is a tourist spot.

It may be mentioned here that to make the Chunchanakatte Falls more attractive and to draw more and more tourists, the Tourism Department organises Jalapathotsava — with illuminated surroundings and cultural programmes — every year. This year due to COVID-19 pandemic, the Jalapathotsava is destined to be shelved.