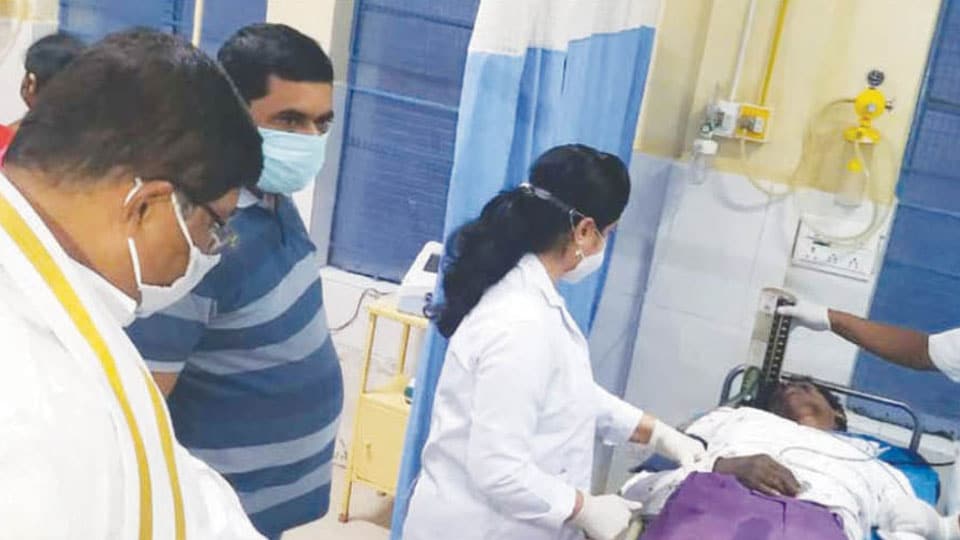 Mandya: Ministers have a heart too. Mahalakshmi Layout MLA and Food and Civil Supplies and Consumer Affairs Minister K. Gopalaiah proved it last evening when he not only rescued an accident victim but also summoned an ambulance to take him to the hospital, got the victim admitted there and ensured better treatment.

The incident occurred last evening at Nagamangala on Bengaluru-Mangaluru National Highway near Bellur Cross where one Ganesh from Bengaluru was travelling on his bike on the Highway towards Hassan. His bike rammed into a road divider and an injured Ganesh fell on the road.

At the same time, Minister Gopalaiah’s official convoy was passing on the same road towards Hassan. Spotting the accident and seeing the victim lying on the road, Gopalaiah stopped his vehicle and rushed to the youth’s help. He personally called an ambulance and admitted the youth to Adichunchanagiri Hospital at the nearby B.G. Nagar.

The Minister ensured that Ganesh got immediate medical help. Though Ganesh did not suffer any major injuries, he is being treated at the Hospital. The Minister’s move came in for a lot of public appreciation. A case has been registered at Bellur Cross Police Station.