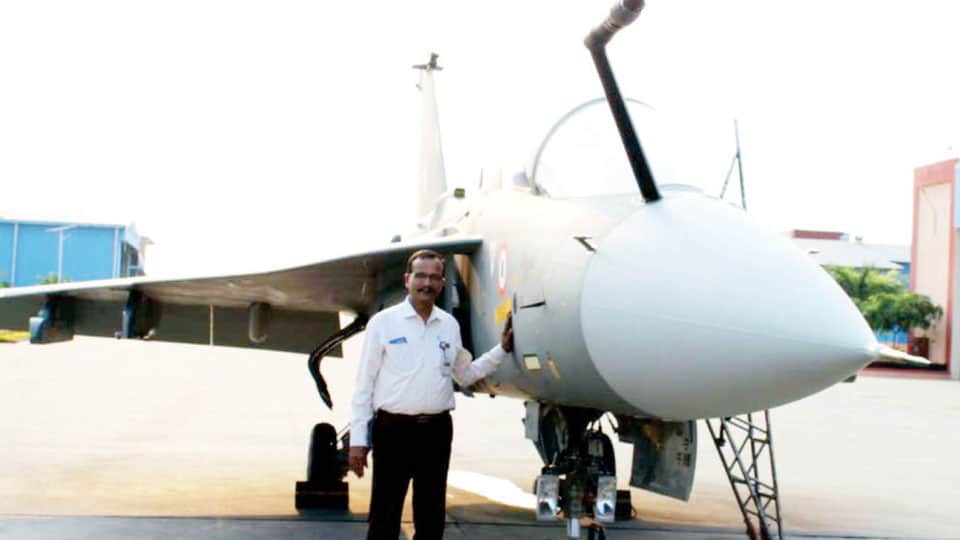 The Tejas man from Mysuru

Mysore/Mysuru: The Indian Air Force (IAF) recently moved some of its Tejas Light Combat Aircraft (LCA) from their home base in Sulur in Tamil Nadu to the western sector to strengthen its operational readiness against Pakistan amid border tensions with China in eastern Ladakh.

In a related development, the Aircraft Research and Design Centre (ARDC) of Hindustan Aeronautics Limited (HAL), has completed the structural design of the new variant of the LCA called Tejas Mk1A — with more combat prowess than the current variant — and HAL hopes to have the final configuration of the Tejas Mk1A by 2022-23.

Reports say that the Ministry of Defence is expected to award the Rs. 38,000 crore contract of 83 Tejas Mk1As to HAL and the contract is likely to be finalised in the last quarter of 2020. HAL is to deliver 73 fighters and 10 trainers under the contract. The Tejas MK1A will set aeronautical benchmarks for India’s future fighter programmes.

Along with the above latest updates, here is a feel good story about a Mysurean who worked as an engineer in HAL and who, days before his retirement, received a commendation letter from none other than Chief of Air Staff Air Chief Marshal R.K.S. Bhadauria. He received the letter at the Air Force Station Sulur when the second squadron of Tejas ‘Flying Bullets’ was inducted.

P.G. Yogindra or Yogi as his colleagues fondly call him received the rare honour by IAF bestowed upon a civilian officer. Ponnathapura Gundappa Yogindra is a resident of Vidyaranyapuram in Mysuru and he served the HAL for over 35 years. One of the most respected and popular aeronautical engineers of HAL, Yogindra retired as Assistant Director and the journey was not easy for him and since childhood, life was a struggle.

Life was a struggle

He is the son of late P.S. Gundappa and late Susheelamma couple and had a humble background. Yogindra was the eldest among the six children and his father worked as a cooking contractor. The family battled poverty and as the eldest son, Yogindra was a witness to the family struggles.

His father, as a cooking contractor, had work only during wedding season and occasional ceremonies. To supplement the family income, Gundappa used to sell bondas and bajjis on roadsides. Yogindra helped his parents and his day used to start early as he used to collect firewood. Piping hot idlis, vada and rice bath used to be prepared at home and sold by the side of the road.

The poverty-stricken family had to pledge household utensils at a local pawn shop to generate money to cook and sell items. The family managed small profits and yet most of the days the family members had to sleep on empty stomach after drinking water. Yogindra studied in Sarada Vilas School till Class 12 and the school gave some concession in fee.

Both his parents were not educated and community Sabhas like Babbur Kamme Sangha helped the siblings in education. Sadly, there was no help from any of their relatives. Yogindra was a first-hand witness to the difficulties faced by his mother during pregnancies and added to the pain was poverty. The children did not even have proper clothes to wear and there was no guarantee about the future.

Out of sheer hard work and dedication, Yogindra did his mechanical engineering from National Institute of Engineering (NIE) Mysuru and M.Tech from IIT-Kanpur. He was passionate about kite-flying since childhood and this passion probably ignited the fire in him for planes. He used to make his own kites and make it stronger to fly longer.

At IIT Kanpur, Yogindra passed out with flying colours and had even published two papers in international journals on tools design. He had secured a job in a company at Secunderabad and had come to Mysuru on some work where he attended an interview at HAL. The Secunderabad-based company faced a lockout and meanwhile, he got an appointment order from HAL.

Yogindra joined HAL on May 2, 1985 as a Grade-2 Officer and put in 35 years of service. He retired as a Grade-10 Officer as Assistant Director. Sharing his professional and personal experiences with Star of Mysore, Yogindra said that he was inducted to the Aircraft Manufacturing Division in 2016 and the demand to complete the Tejas indigenous fighter plane was at its peak.

“We accepted the challenge and results are for everyone to see now. It was not an easy job and everything had to be perfect. It takes a minimum of 26 to 36 months to manufacture a single aircraft. When the production was less and with the cooperation from the staff, HAL produced 16 aircraft from 2016 to 2019 and the same were handed over to the IAF. This is an unforgettable moment in my life,” Yogindra said.

In the air show held in February 2019, HAL was given a new design for Tejas. “We had kept certain spares while manufacturing the earlier 16 planes and using them, we manufactured a new Tejas in just 12 months and was handed over to the IAF.

Before joining the Tejas project, Yogindra, as a Grade II engineer at the Rotary Wing Research Design Centre, witnessed the manufacture of Advanced Light Helicopter (ALH) from close quarters. He played a crucial role in the first prototype roll-out of ALH in the early ’90s.

From 1990 to 1996, Yogindra served the Aircraft Research and Design Centre (ARDC) and that brought him close to LCA Tejas project. Not only fighter planes but also HAL manufactures several spares for the civil aviation sector. Yogindra headed the Export Department of Aircraft Division from 2006 to 2011 where he was responsible for production of Airbus A320 doors, B737’s main deck cargo doors/installation kits and Boeing B777 uplock box assembly.

“Earlier at HAL, only six Airbus doors were manufactured per month and after I took over, we used to make 20 sets of doors and deliver. I am proud to say that 50 percent of the Airbus doors have been fulfilled by HAL. It is a precision job and after manufacturing, the doors can straight-away be fitted into the aircraft without even a single modification. HAL has the commendation and recognition for this,” Yogindra explained.

The quality and precision maintained by HAL in making Airbus doors have been made a case study by Indian Institute of Management and has been published in Harvard Business Review mentioning Yogindra’s name.  From 2011 to 2015, Yogindra headed the Integrated Materials Management Department of Aircraft Division where he took over the supply chain for the Hawk project. He looked into planning, production and assembly of Hawk aircraft, its customer support and its supply chain management. In 2016, Yogindra was back with the LCA Tejas Division and was later promoted as Executive Director.

Under his leadership, 16 Tejas fighters were produced and his tenure was marked by better production standards, efficient supply chain, infrastructure ramp-up and the production cycle was considerably reduced. The LCA division went for faster assembly technologies. On March 17 this year, the first Final Operational Clearance fighter of Tejas flew out of HAL hangars in a record period of 13 months. The IAF commendation received by Yogindra was a validation of his hard work and passion.