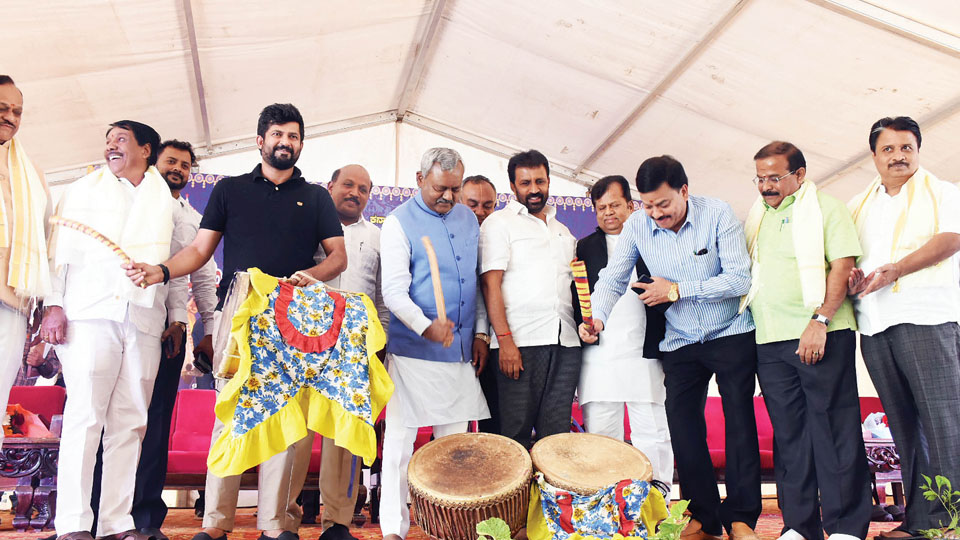 Mysore/Mysuru: The two-day District Yuvajana Mela organised by the Department of Youth Empowerment and Sports in association with the District Administration and Mysuru Zilla Panchayat, got off to a colourful start at Chamundi Vihar Stadium in Nazarbad yesterday, with youths displaying a variety of folk arts and other performances.

MP Pratap Simha, who was the chief guest, said that the Department of Youth Empowerment and Sports has plans to organise more such events in the coming days.

Pointing out that the event, apart from providing a platform for youths to exhibit their skills and talent, Simha said that it also provides an opportunity for the participants to find jobs.

Noting that the State Government has given reservation for sportspersons in Government jobs, he hoped that the Department will take more measures for encouraging youths to take part in such events and bring out the hidden talent in them.

The event was open for youths from the district aged between 15 and 29 years. It featured contests in a total of 18 categories for boys and girls, which included Bhavageethe, Gigi Pada, Lavani, Kolata, Veeragase, Dollu Kunitha, Rangageethe, Folk dance, Bhajans etc.

Indushri (Kuchupudi)  and Sujayeendra  Rao (Tabla) of Mysuru, who have been selected to take part in the National level Youth Meet scheduled to take place at Puducherry, were felicitated on the occasion. Also, notable achievers of the event were distributed mementoes.

Today, the second and concluding day of the meet, will feature a variety of  sports and cultural events (men and women) exclusively for tribals, which include running race, shotput, long jump, volleyball, throwball, musical chair etc.