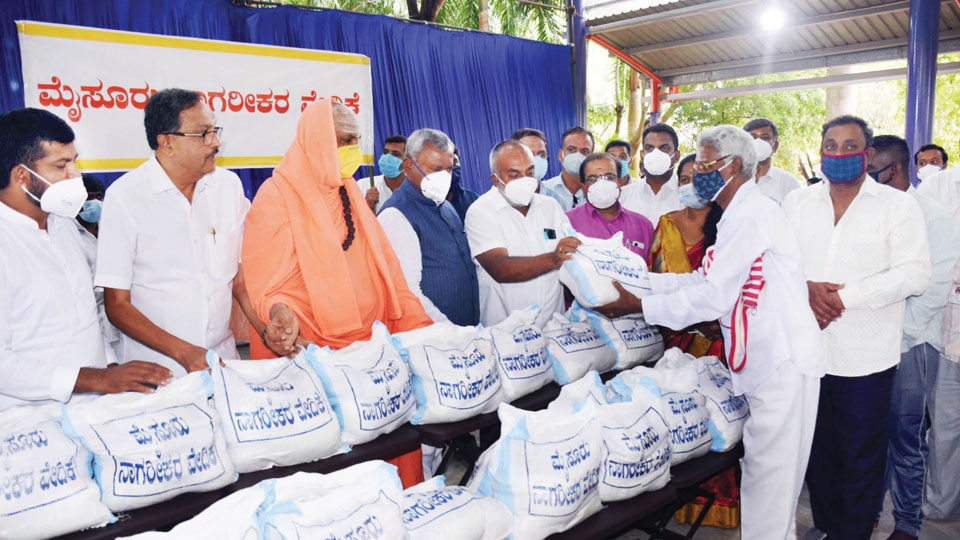 Speaking on the occasion, MP Pratap Simha said that Suttur Swamiji, true to his stature, has joined hands with the District Administration in the battle against the deadly COVID-19 pandemic, which has brought untold miseries to crores of families across the country.

Lauding the efforts of Suttur Mutt in extending help to the people in these critical times, Simha said that the Seer has been the guiding force to the people, who are in distress due to the crisis.

District Minister S.T. Somashekar, in his address, recalled that the MCF had extended all possible help when the pandemic broke out last year by providing free ration and medical kits to affected people.

Recalling the efforts of the MCF in building houses for affected people of North Karnataka who were devastated by floods and rains in 2009, Somashekar said that he has been getting numerous calls from different quarters seeking the help of Suttur Mutt for tiding over the current crisis.

The Minister thanked the Seer and the Mutt for their continuous support and help to the District Administration at a time when the State is battling a pandemic like never before.

Out of the 1,000 kits, 500 kits will be distributed to troubled artistes and labourers in the first stage now and to other sections in the second stage later.

Speaking to press persons after the programme, Somashekar, referring to comments made by some disgruntled BJP leaders who took to Dasara analogy for targeting Chief Minister B.S. Yediyurappa (BSY), said that such leaders were minute in stature as compared to Yediyurappa.

Noting that leaders who do not have any base and lost the polls, were often making statements on change of leadership in the State, Somashekar asserted that the BJP will fight the next Assembly polls under the leadership of Yediyurappa.

In an apparent reference to Tourism  Minister C.P. Yogeshwar, Somashekar said that those who are incapable of even winning Local Body polls, are making nonsensical statements against BSY.

Replying to a question on lockdown relaxations in the district, Somashekar said that the relaxations have been announced following the drastic drop in case Test Positivity Rate in Mysuru.

“Despite the lockdown relaxations, there is no letting down of guard and there will be no complacency in adhering to Government guidelines. The people should  strictly follow COVID appropriate behaviour in order to keep the deadly pandemic in check and also to prevent possible third wave,” he pointed out.

He further said, Health Minister Dr. Sudhakar, who visited the city last week, has given some important tips on the measures to be taken for preventing any subsequent waves of the deadly pandemic in any form or variant.

When asked about vaccine shortage in the district, Somashekar said that the Government, in a bid to start colleges, has prioritised vaccination of students and college staff . Asserting that there is no dearth of vaccines, he said that people of all eligible age groups will be vaccinated  as quickly as possible and there need not be any doubts regarding this.

Replying to a question on under-reporting or under-counting of COVID deaths in district, Somashekar said that Health Minister Dr. K. Sudhakar has given his inputs regarding the issue.

Arguing that the deaths were not accounted for properly ever since the second wave of the virus attack, he said that a death audit has been ordered for corrective action and to arrive at the exact numbers of death toll. A Death Audit Committee will be visiting the city shortly to ascertain and verify the facts, he said and added that those found guilty in the audit report must be punished for their wrongdoings.