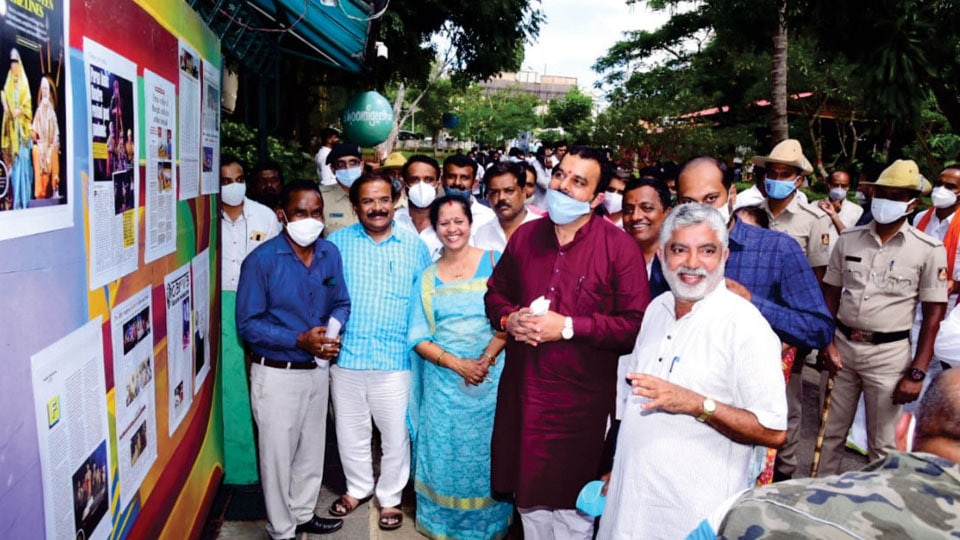 Mysore/Mysuru: In his first visit to ‘Rangayana’ after being inducted into the Basavaraj Bommai Cabinet, Energy and Kannada & Culture Minister V. Sunil Kumar visited the theatre repertory in the city on Wednesday.

During his visit, the Minister was taken around the entire Rangayana premises and was explained about the activities going on there.

Rangayana Director Addanda C. Cariappa, who took the Minister around the repertory, presented a memorandum to him seeking funds for various theatre activities and also for salaries of employees and other expenditures.

Highlighting that Rangayana has four platforms (Rangamandiras) — Bhoomi-geetha, Sriranga, Vanaranga and B.V. Karanth Ranga Chavadi — Cariappa told the Minister that the theatre repertory has over 70 employees,  out of which only 19 are getting salaries from Government wage grants.

Maintaining that the Govern-ment has released a meagre sum of Rs. 60 lakh in 2021-22 in the wake of COVID-19 crisis, he said that this fund was not enough even to meet salaries.

Stating that Rangayana is engaged in staging a series of  popular plays such as   ‘Malegalalli Madumagalu’ and ‘Sri Ramayana Darshanam’ of poet Laureate Kuvempu, Saraswathi Samman awardee Dr. S.L. Bhyrappa’s work ‘Parva’ etc., Cariappa informed the Minister that the theatre repertory has many young and budding  artistes.

Appraising the Minister on the  calendar of activities and the role of theatre giant B.V. Karanth in the setting up of Rangayana over three decades ago, the Rangayana Director said that the theatre repertory is hosting theatre training workshops for amateur artistes twice a year and is engaged in organising College Rangotsava, Greeshma Rangotsava, Chinnara  Mela, Navarathri Rangotsava  and such other annual events at different points of time.

Noting that the Rangayana is also conducting  a theatre diploma course for the past 10 years under Bharatiya Ranga Shikshana Kendra, he said that there is no separate grant for running this course.

Asserting that Rangayana was incurring an expenditure of Rs. 1.48 crore annually, which included Rs. 82.80 lakh for theatre activities, Rs. 25 lakh for maintenance and Rs. 40 lakh for Bharatiya Ranga Shikshana Kendra, he sought the help of the Minister for getting the shortfall amount of  Rs. 87.80 lakh for meeting expenditures.

Appealing for decentralisation of power in Kannada and Culture Department, Cariappa said that the appointment of a Joint Director will help in promoting culture besides expanding the activities of the Department.

Recalling that this system was in place several years ago, Cariappa said that the decentralisation will also help in saving money and time as unnecessary travel from different district headquarters  to Bengaluru will stop. He also argued that such a step will widen the scope of theatre activities.

Pointing out that theatre activities will be hit if power supplies are cut off in case of non-payment of electricity bills, he said that the best way to overcome this situation is to have a separate power line.

Sunil Kumar, who is also the Energy Minister, directed the CESC officials to look into the matter and take necessary action in this regard.

READ ALSO  Chinnara Mela at Rangayana from Apr.13 to May 10

Rangayana Joint Director V.N. Mallikarjunaswamy and other officials were present.