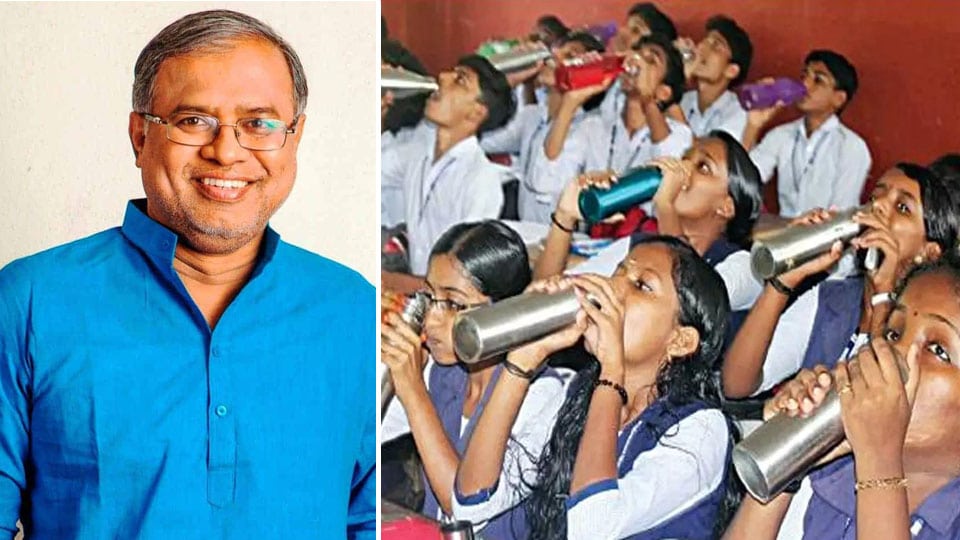 Bengaluru: Minister for Primary and Secondary Education Suresh Kumar, known to be always keen to effect a positive change to improve any system, has now come forward to introduce ‘Water Bell’ in all schools in the State as being followed at schools in Kerala.

He has asked the Commissioner of Department of Public Instruction to work on how the proposal could be implemented and arrive at an action plan soon.

Speaking to Star of Mysore, Suresh Kumar said that the body consists of 70% of water and staying hydrated is essential to maintain a good health condition. He observed that many students because of dehydration invite many ailments. Quoting the practice in vogue in Kerala schools, the Minister said that like bells for classes, lunch break and games, a bell thrice a day is being rung in schools in Kerala to remind students to drink water. He added that the good concept was initiated in a school in Kasargod which is now being followed in schools in Thrissur, Thiruvananthapuram and other places in Kerala.

A few private schools are said to have been following the ‘Water Bell’ concept in Karnataka also and possibly the Government Schools too would fall in line once the Minister issues a directive through the Department.

Suresh Kumar, in a letter written to the State Chief Election Commissioner, has appealed the latter not to utilise school teachers for poll duty. The Minister is said to have contended that the absence of teachers has resulted in leaving syllabus unfinished and teachers tend to lose tempo of teaching owing to the break.

He has also requested the State Election Commissioner not to utilise teachers for any other poll-related duties also.

Suresh Kumar has said that it is being contemplated to arrange special classes for SSLC students in Government Schools right from the commencement of the academic year in the morning and evening after assessing the learning ability of the students in any particular subject of the curriculum.

He was speaking to the media after addressing a meeting of Principals of schools focussing on quality education for students.

The Minister observed that the learning interest was found to be declining among students after third standard and added that the teachers have been asked to tackle that problem.

He contended that students have fallen back in Mathematics, English and Science which would be tackled by grooming the teachers first who can later put the new ideas to practice.