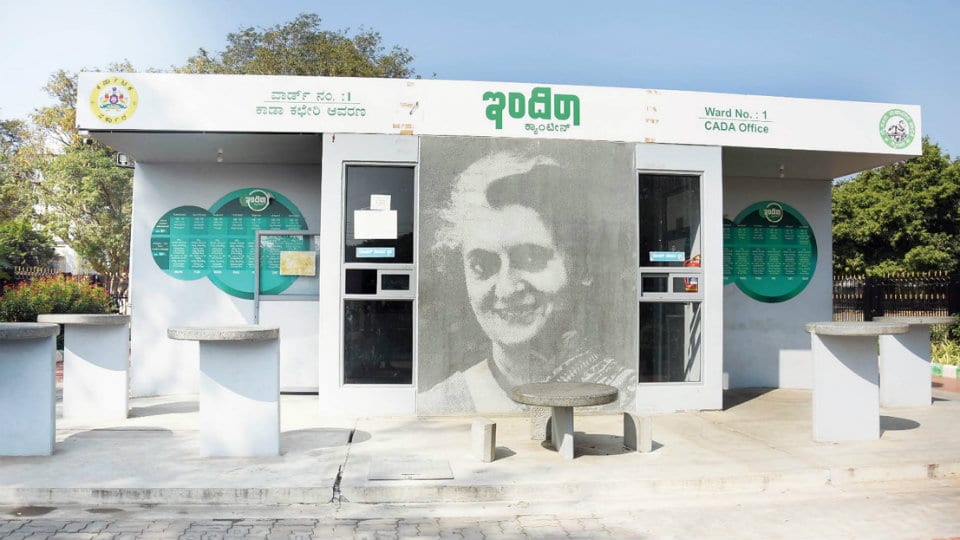 Mysuru: Facing cash crunch, the day-to-day functioning of Karnataka Government’s Indira Canteen, which offers subsidised meals to the urban poor in Mysuru, is turning doubtful. Marshals and contractors of all Indira Canteens, both in Bengaluru and Mysuru, have not been paid since the last one year and this has led to several issues in its daily operations.

Indira Canteen, one of the ambitious ‘food for all’ projects of the State Government, was launched first in Bengaluru during August 2017 and then in Mysuru during January 2018 to make the two cities ‘hunger-free’ by serving affordable and clean food to the poor. The inspiration to Indira Canteens was Amma Canteens in neighbouring Tamil Nadu.

As the State Government and the Mysuru City Corporation (MCC) have not cleared dues, the food contractors are running the show themselves and are now struggling to meet ends due to paucity of funds. Indira Canteens are a pet project of former Chief Minister Siddharamaiah and the intention of launching this project was to ensure that the poor are not deprived of food.

To supply food — over 500 breakfast, lunch and dinner (1,500 plates) a day — at 11 canteens in Mysuru, food is prepared at two centralised kitchens located at Alanahalli and Kumbarakoppal. There are over 200 people working as cooks, marshals, cleaners and quality check personnel in Mysuru and they have not been paid since many months.

Though contractors have already written to the Mysuru Deputy Commissioner and the Mysuru City Corporation Commissioner urging them to request the Government to release funds, sources say that even the 125 Indira Canteens run in Bengaluru are facing fund crunch and funds may not come that easily.

Lack of payment has made the workers a worried lot. Payments were on time for one year and it started slowing down after the Congress Government lost power. Though the Congress-JD(S) coalition Government took a stand to continue the scheme, funds were curtailed and stopped coming later.

The BJP that came to power next initially proposed to change the name of the Indira Canteens to Annapoorna Canteens as the BJP did not want to highlight the name of one political leader for a public scheme.

Lack of funds has become a flashpoint between BJP and Congress with Siddharamaiah lashing out at Chief Minister B.S. Yediyurappa accusing him of attempting to ‘axe down’ the canteen. He has warned  that the opposition will protest intensely if the Indira Canteens were closed.

Speaking to Star of Mysore, Mysuru Indira Canteen food contractor M.V. Madhu said that he has written to the DC and the MCC Commissioner to release the payments and they have assured that payments will be released within a week or so. “Despite non-release of grants, we are running the show as we feel that the poor must not be deprived of their food. We have been maintaining quality and have not cut down the quantity,” he added.