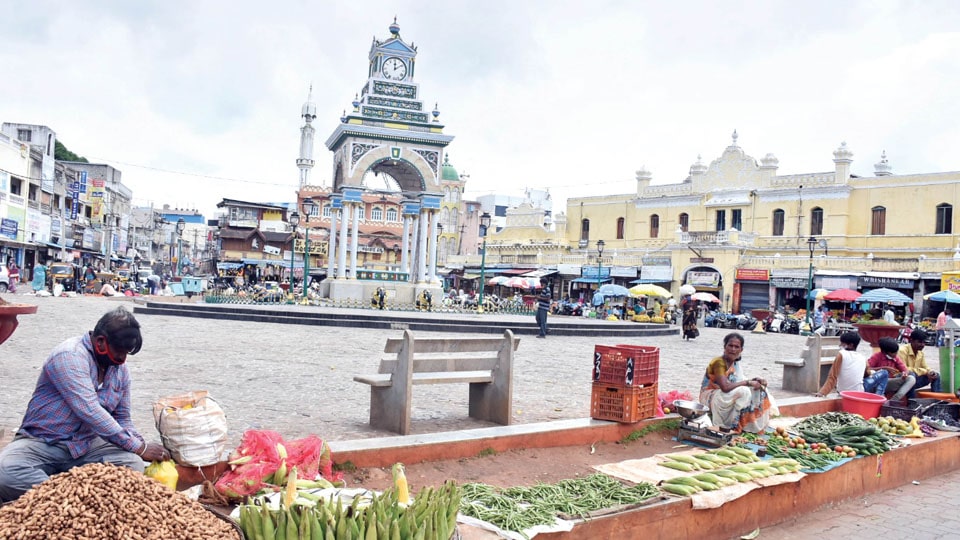 Mysore/Mysuru:  Even as the District Administration cancelled the Sunday total lockdown from today (Aug. 2), the city witnessed a mixed response to the first lockdown-free Sunday, with traders at most of the commercial streets seemed to be reluctant to open shops in the city.

After the Union Government  announced unlock measures in third phase further lifting some more restrictions, the State Government, a couple of days ago  decided to withdraw Sunday  total lockdown and night curfew diktat that was supposed to be till Aug. 2.

However, the lifting of the Sunday lockdown seemed to have received muted response from the public, who are weary to venture on to the streets in the wake of the rapid spread of COVID-19 pandemic in the city over the past couple of weeks.

On D. Devaraj Urs Road, some shops were seen open, while the rest remained closed and so was the case at Devaraja Market Complex, Sayyaji Rao Road, Ashoka Road, N.S. Road, Dhanvantri Road and other prominent commercial streets in other localities of the city. However, a few customers were seen shopping at the opened shops, with people showing little enthusiasm for shopping on the first lockdown-free Sunday.

Shops at Shivarampet and Santhepet in the heart of the city remained shut as the traders had voluntarily declared bandh  on all Sundays even before the State Government announced total lockdown on Sundays from July 5 to Aug. 2. The prominent streets of the city too witnessed  much lesser vehicular and pedestrian movement as compared to the Sundays before the outbreak of COVID-19 pandemic.

READ ALSO  He was inquisitive since childhood: Mother

Autos, taxis and maxi-cabs also were out on the streets, but there was poor public response.

Though most of the hotels and restaurants were open, several of them recorded business far less than anticipated, bringing concerns to the hotel owners.

With the Sunday lockdown lifted, the Mysuru Zoo and the City Palace too were opened for visitors. But the usual Sunday rush was glaringly missing, as both the tourist spots saw only a few tourists and visitors.

Overall, the business and commercial activities in the city on the first lockdown-free Sunday fell short of the expectations, with people yet to come out of the COVID-19 scare and fearing to come out on to the streets.