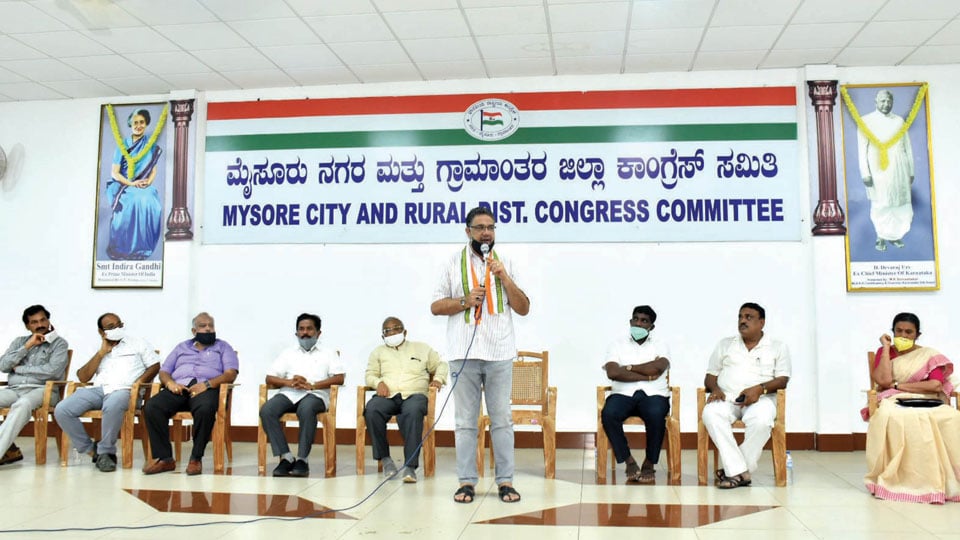 Mysore/Mysuru: With people put to a lot of hardship due to the outbreak of the deadly COVID-19 pandemic, NR MLA Tanveer Sait has asked Congress party workers to take up the role of Corona Warriors in fighting for the cause of the people.

Addressing party workers at Congress Bhavan near the City Railway Station here recently, Tanveer Sait said that it was important for the party workers to instil confidence among the people at a time when they are scared of the virus.

He noted that the party workers should educate the people on the need for following COVID-19 norms such as social distancing, wearing  of face masks and use of hand sanitisers.

Instructing the party workers to don the role of Corona warriors and respond to the problems of the people irrespective of their caste, creed and religion, he said that KPCC President D.K. Shivakumar has announced that party workers engaged in COVID-19 work will be brought under health insurance cover.

Referring to his absence from the Constituency for a few months, Sait said that he was forced to stay away from the people after he sustained  serious injuries in a brutal assault on him at a wedding function in the city in November last. Now that he is heading NR Constituency COVID-19 Task Force, he will stay amidst the people of the Constituency and come to their help whenever needed.

Former Chamaraja MLA Vasu, who also spoke, said that he has written a letter to the Government seeking to despatch more number of CT Scanners, Ventilators, ECG equipment and other medical instruments to the designated COVID-19 Hospital in the city.