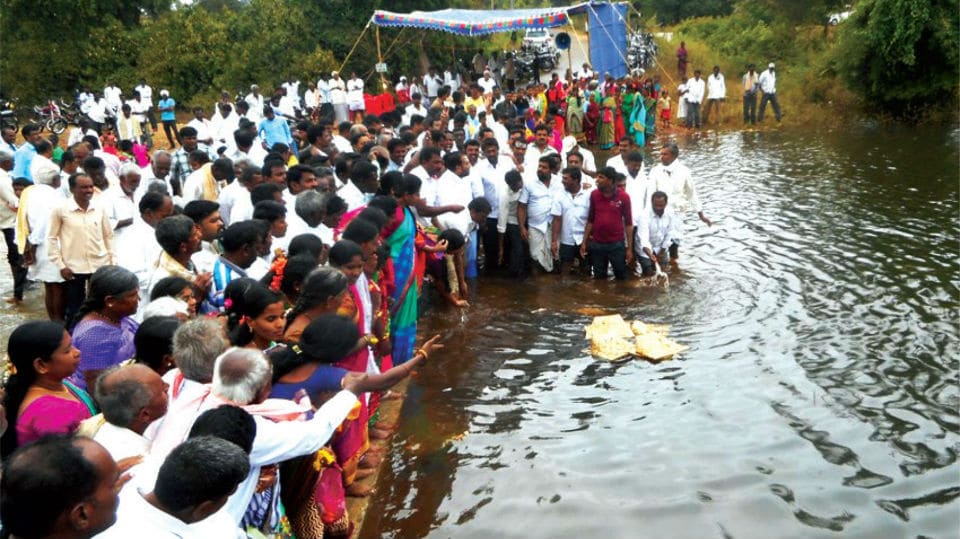 Hunsur: MLA H.P. Manjunath, along with his son, offered bagina to Jeenahalli Lake which is filled to the brim after a gap of 20 years, on Friday.

The farming community have expressed their happiness as the lake is filled to its capacity and sufficient water is being supplied for farming.

Speaking on the occasion, Manjunath said that the lake was dry for the past 18 years and with emphasis given to fill up the lakes through lift irrigation from Lakshman Theertha River to Jeenahalli Lake, Belikere, Halebidu Lake, Bolanahalli Lake, Kolaghatta Lake, the Jeenahalli Lake is now full.

Manjunath also said that the Belikere lake will also be filled within the end of this month and added that the works on filling up of Beejaganahalli Lake, Somanahalli Lake, Puttaiahna Lake had already begun. Adding that a project to fill 25 lakes including nine lakes in his constituency had been conceptualised with MLA G.T. Devegowda, Manjunath said the execution of the project would commence once the water level at the KRS reached 96 ft.

He also took a dig at his critics stating that he had answered all their criticisms through his works.