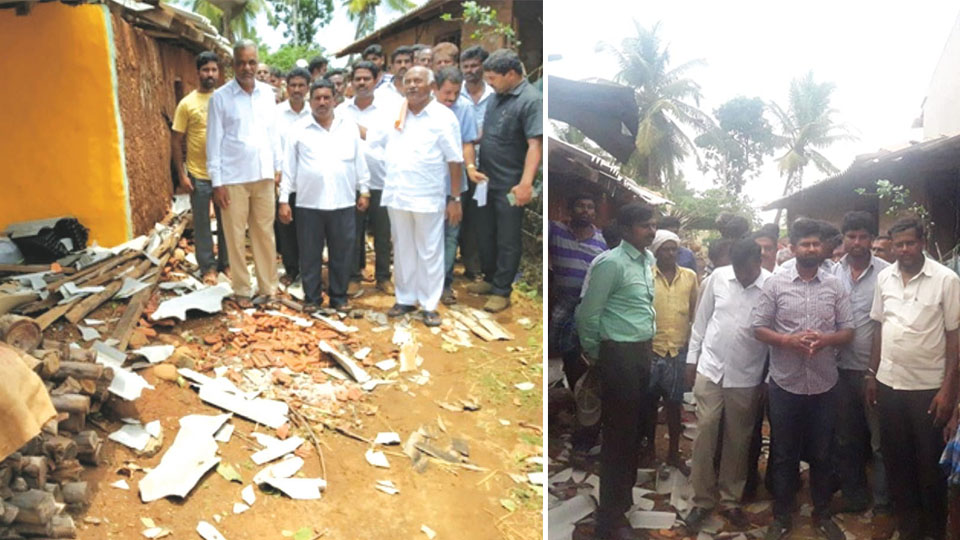 Hunsur:  MP Pratap Simha and MLA A.H. Vishwanath visited the rain-affected areas in the taluk yesterday and took stock of the situation.

Many houses were damaged in the rain that lashed in Hanagodu limits on Tuesday evening which also inundated agricultural fields.

Vishwanath, accompanied by taluk officials, visited the rain-affected villages and interacting with the people, said that he was pained to hear about loss of livestock and damages to houses.

He suggested the officials to arrange compensation from the Central and State Governments under the fund for natural calamities. He said that CESC and taluk officials had worked overnight and got roads cleared of fallen tree branches and electric poles.

He disclosed that the Horticulture Department would provide a compensation of Rs.5,400 per acre of banana plantation damaged in the rain and Rs.180 for each of the uprooted coconut tree.

Tahsildar Basavaraj said that a compensation of Rs.4 lakh would be paid for loss of a life by the Centre and the State along with Rs.1 lakh from the CM’s Relief Fund. He added that compensation would also be given for damaged houses in proportion to the intensity of damage.

MP Pratap Simha, accompanied by officials and BJP leaders, visited the rain-hit villages and interacted with the residents assuring a suitable compensation from the Central  Relief Fund.

Hunsur
When a cobra wanted to travel in a Police vehicle
Dr. Rajkumar birth anniversary celebrated in Mysuru