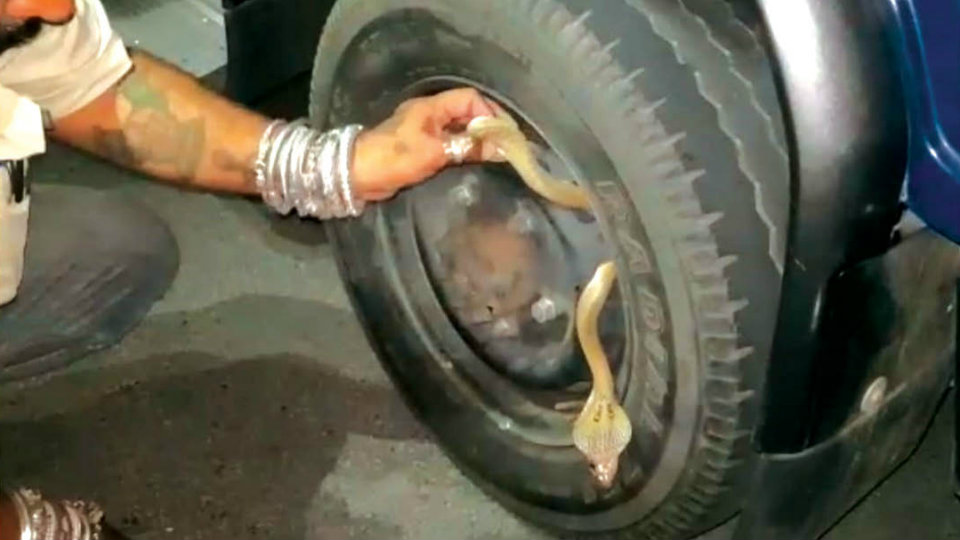 When a cobra wanted to travel in a Police vehicle

Mysuru:  Normally, Policemen are a feared lot especially by criminals who try every means to avoid the long arms of law. But yesterday there was an incident where Policemen themselves had to experience what is fear.

They were frightened by a cobra that was coiled in the wheel of a moving Police vehicle and no Policeman was ready to take the risk of catching the reptile and releasing it to a safe place.

Fearing snakebite, the Policemen just watched as the snake continued to take refuge inside the wheel and even passersby enjoyed the scene as the men in uniform were kept on tenterhooks. Finally, city’s well-known snake rescuer and wildlife conservationist Snake Shyam was called in and he rescued the snake.

Police Academy Dy.SP Jayamaruthi, who was proceeding in the vehicle along with the driver near Hardinge Circle, was alerted by public about the presence of a snake in the rear wheel. Jayamaruthi immediately asked the driver to stop the vehicle and they saw the snake. Not ready to take the risk, Jayamaruthi called Snake Shyam over phone. A few people had gathered at the spot and the snake-in-the-wheel was the centre of attraction.

Arriving within minutes, Snake Shyam said that the cobra might have coiled around the disk of the wheel to escape the intense summer heat. As there was no cap fixed on to the wheel, it was easy for him to rescue the snake, he said.

The cobra was around two years and was not injured. As it is summer, reptiles come out of their burrows to find shelter in cool places, he added.

Dy.SP Jayamaruthi said that the snake may have coiled around the disk of the wheel when the vehicle was parked in the Police Academy shed.

“When we were proceeding near Hardinge Circle, a motorist alerted us about the snake,” he said and added that initially he had thought that it was a rope. “We realised it is a snake only later,” he said.