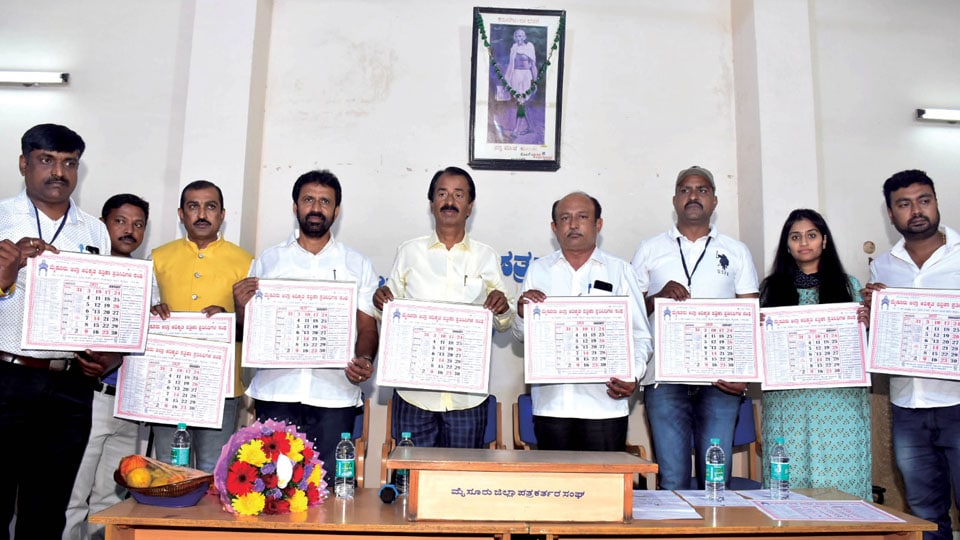 He was speaking after releasing the 2021 calendar and fifth anniversary programme of the Sangha at Patrakarthara Bhavan here this morning.

Highlighting their role in keeping the readers abreast of the latest news, he promised to build shelters for them out of his MLA fund at designated points across the city. He said that he would also extend financial help for construction of building if the Sangha is allotted a CA site.

Former MLA Vasu, who is also the Hon.President of the Sangha, lauded the Sangha for striving for the cause of newspaper agents and distributors. Condoling the death of the Sangha’s Hon. President Janardhan and the Sangha President B.N. Nayak a few months ago, he said that COVID-19, as a single epidemic, has devastated the entire world like no other disease in the past. Complimenting the Sangha’s programmes taking into consideration the interests of all the Sangha members and their children, he said that newspaper agents and distributors too must be brought under the unorganised sector. Underlining the benefits of being brought under unorganised sector, Vasu said that the inclusion will greatly help them to avail all Government benefits covered under Labour welfare schemes.

Vasu called upon journalists to highlight the plight of newspaper agents who work on all days, braving the sun, rain and inclement weather and to bring it to the notice of the Government.

Mysuru District Journalists Association (MDJA) President  S. T. Ravikumar, who was the guest of honour, said that this programme highlights the humanistic values of the Sangha.

Complimenting the Sangha  for coming to the aid of its members who faced a lot of hardship during the  COVID-19 crisis, he said that MDJA will stand behind it all the times and render whatever help  and co-operation it can.

On the occasion, several members, who faced a lot of hardship during COVID-19 were extended financial help out of the interest generated from the fixed deposits made by the present and past Legislators (Rs. 50,000 by Vasu and Rs.1 lakh by L. Nagendra). Sangha President P. Suresh, Vice-Presidents K.N. Venkatesh Babu and S. Shantesh, General Secretary A. Ravi, Joint Secretaries B. Venugopal and J. Chandrashekar, Treasurer M.N.Prakash and others were present.