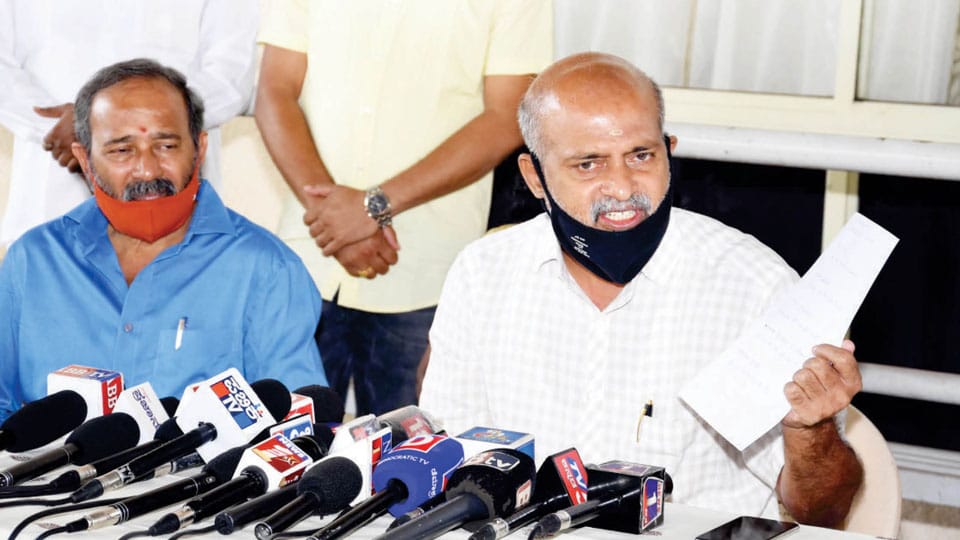 Mysore/Mysuru: Slamming the State Government for shunting out Kannadiga IAS Officer B. Sharat barely a month after his appointment as Mysuru Deputy Commissioner, JD(S) MLA S.R. Mahesh claimed that the State Government has appointed Rohini Sindhuri as the new Mysuru DC at the behest of Andhra Pradesh Chief Minister.

Addressing a press meet at his office near Ramavilas Road here this morning, Mahesh wanted to know whether it is B.S. Yediyurappa (Chief Minister) who rules the State or the Andhra CM.

Contending that the premature transfer of Sharat, who is also a Dalit, is an insult to Kannadigas, Mahesh said that it is pertinent to note here that the new DC Rohini had moved the Court three times in the past  against the State Government  questioning her transfer.

Accusing Rohini of irregularities in the spending of Rs.175 crore sanctioned for  Gommateshwara  Mahamast-abhisheka at Shravanabelagola when she was Hassan DC earlier, Mahesh said he wanted to know the intention behind the posting of Rohini Sindhuri as Mysuru DC when Dasara is just 18 days away.

Continuing, Mahesh said that Sharat was transferred on the day when his digital signature, which is mandatory for signing of bills and orders was authorised by the Government, which has given rise to several questions.

Wondering  when the digital signature of the new DC Rohini would get authorisation with Dasara just a few days away, Mahesh said the delay in digital signature was badly hurting  rural people the most as many  bills are awaiting DC’s clearance.

Charging the BJP Government of running a transfer mafia, the MLA said the Government had indulged in indiscreet transfers at a time when the State is reeling under COVID-19 and a crumbling economy.

Wanting to know whether District Minister S.T. Somashekar who held a meeting with Sharat on Dasara preparations only on Sunday was in the know of  Sharat’s transfer, the MLA said that although transfers are normal, the timing of Sharat’s transfer is suspicious and questionable.

He suggested Sharat to move the CAT seeking a stay on his abrupt and premature transfer.