Home » Feature Articles » Mobile Phones From a Blessing to a Curse 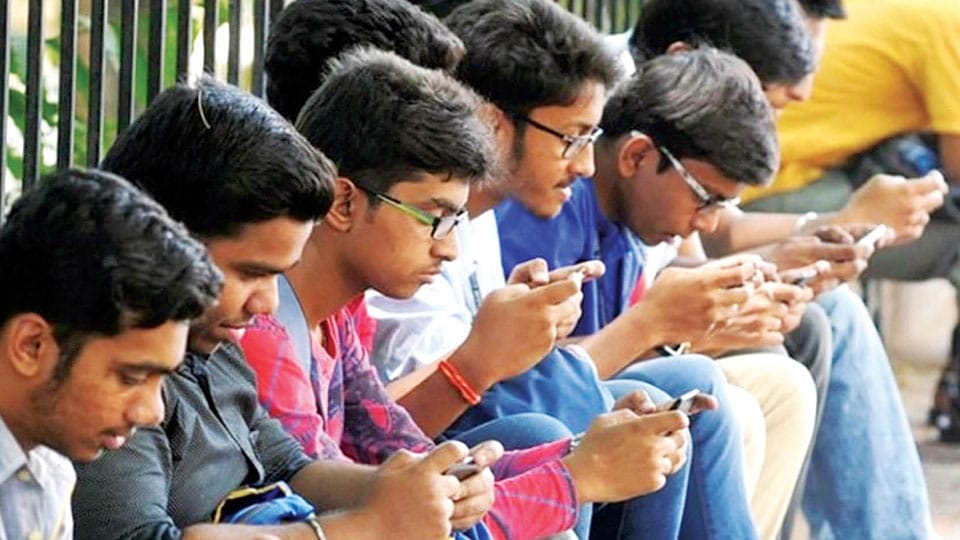 Mobile Phones From a Blessing to a Curse

I still recall the excitement it caused when IBM announced the development of the first smart phone called the Simon back in 1992. I could not believe then that one could carry a phone anywhere without wires attached to it.  Though the prototype model was bulky compared to the cell phones of today, it was a revolution in communication.

The very thought of being in touch with family and friends constantly anywhere in the world was astonishing. I thought it was God’s gift to mankind.  Barring a few who owned personal phones called the Land Lines in their homes and business places, the rest of the population in India depended on public STD phones. While using this facility, we were all the time conscious of the meter running and showing the cost of the call.  And there were coin operated phones wherein we had to feed one rupee coins all the time to keep the call alive ! No denying that even these phones when introduced was a big leap in communication in India.

As time went by, cell phones became slimmer, lighter and more affordable. More and more people started acquiring it. As per data available during 2017, over 400 million people in India owned a smart phone in India and the numbers are increasing each passing day. In addition,  new models being introduced with new features built-in, people are discarding the old one and acquiring new ones constantly.

The increasing speeds of connectivity, by virtue of newer technologies and the Internet, it is a sought-after gadget by almost everyone. The introduction of cameras, social media applications like WhatsApp and Facebook messaging and viewing movies has made the phone indispensable.  It is no exaggeration if one were to say that the phones have literally possessed us across all ages.

What is bad news is that children as young as ten years have started possessing phones.  Lack of control and parental supervision on its usage is fast becoming an addiction. Parents are expressing helplessness in controlling this phenomena.  As per the study conducted by King’s College, London, one in four young people across the globe are addicted to the cell phone.

According to Dr. Manoj Kumar Sharma, Professor of Clinical Psychology, SHUT Clinic (Service for Healthy Use of Technology) Nimhans, Bengaluru, used to treat 1 to 2 patients every week during 2014, the numbers have increased to 8 to 10 per week during 2019 for technology related addiction.  More and more parents are approaching for help from experts to wean away their children from using the gadgets.

The addiction is distancing children from the family and conversations across the dining tables and drawing rooms is becoming almost non-existent. Parents are at a loss in dealing with the situation as they themselves are guilty of this neglect and habit. Micro managing children as a consequence of this situation, the children resist and further aggravating the situation.  It is a common sight to see people glued to the mobile screens in restaurants and in public spaces. Even when couples go out to have a meal in a restaurant, both are viewing or speaking into the phones than enjoying each other’s company.

According to an article published in a national daily on 21st October 2019, researchers at Dhirubhai Ambani Institute of Information and Communication Technology (DAIITC), Gandhinagar, have found that a student spends an average of seven hours a day staring at mobile screens every day.  Some even fifteen hours. The study has also revealed that close to 80% of the students slept less than six hours or less. This is also affecting the eating habits of the young adults and consequently the metabolism of the body. Parents fear that such addiction will hamper the children’s health, studies and their future career prospects.

Usage of cell phones is also becoming a serious safety issue. People using mobile phones while driving or texting messages or taking selfies while driving cars is not only endangering themselves but others too in their path. Even more frightening is texting messages while riding a two-wheeler. The slightest distraction could prove fatal. Given the potholes, unscientific road humps on Indian roads and lack of discipline among drivers add to the probability of accidents.

Laws prohibiting usage of cell phones while driving and levying penalties are proving to be ineffective.  The Police who monitor this express their helplessness to dissuade its use. 2,100 deaths were reported due to usage of mobile phones.  But the Police admit that the numbers could be much more as such accidents go unreported.

Research shows that mobile phones emit radio frequency or microwave radiation and this could affect health of the user directly in the long term. Yale School of Medicine has confirmed that the radiation generated by the mobile phones can affect the brain development of the foetus in pregnant women and potentially lead to behavioural disorders of the offspring.

Before the situation deteriorates and goes out of control,  we need to take measures to regulate the usage of phones. Parents need to play an important role in this transformation.  Schools too should impart lessons on the harms caused by use/misuse of phones. Totally banning the phone will not work. The solution lies in moderation and counselling.  Even more important is for parents to demonstrate by minimising cell phone usage themselves. Simple rules should be drawn up such as no phone hours at home, family time and while sitting together for a meal. Encourage children to read books and write using their fingers. However small the measures, it has become inevitable and cannot be delayed any further.