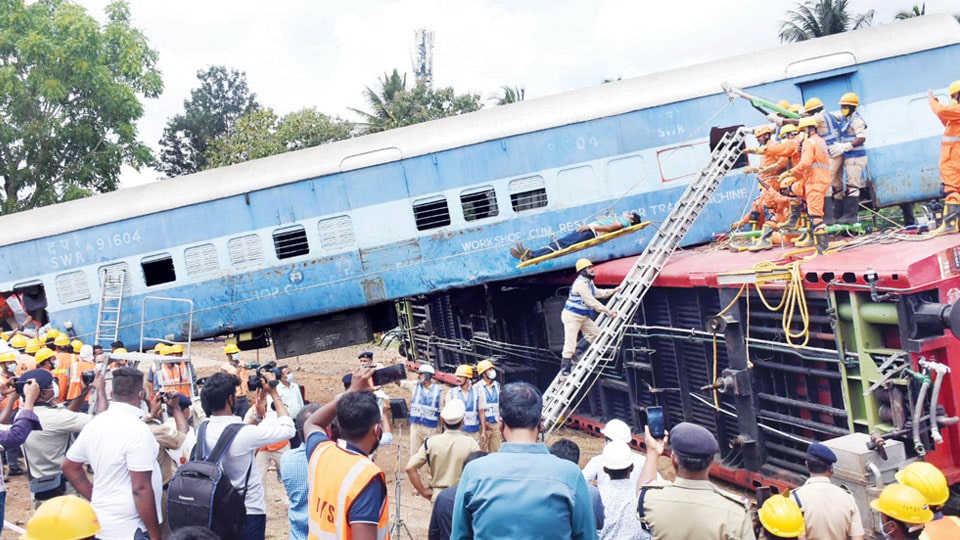 Mysore/Mysuru: Many hooter sounds were heard at the Ashokapuram Railway Station in the city at 9.56 am today and on enquiry it was learnt that two general second class passenger coaches SWR 91604 and SWR 92665 of T.No 06220 Tirupati-Chamarajanagar Express had derailed.

Messages were flashed to the office of the Divisional Railway Manager (DRM) and in turn, the DRM office informed other allied departments. A buzz of hectic activity followed among the officials of the Railway administration as each prepared to rush to the site of the accident.

Within 10 minutes, rescue teams including medics reached the spot to rescue over 15 passengers. Two coaches of the passenger train were derailed with one lying on its side and another mounted atop it.

These were the scenes of the ‘train accident’ or a mock drill enacted by the Railway staff to check the operation preparedness of its personnel in rescuing the victims in case of any accident and speedy restoration of rail traffic in the affected section.

Over 200 personnel drawn from many sections of South Western Railway (SWR), Mysuru and 20 men from NDRF (National Disaster Response Force), jurisdictional Police and Railway Hospital staff and Health Department personnel were involved in the drill conducted at Ashokapuram Railway Station.

After a discarded coach was mechanically derailed by a crane, the rescue team swung into operation. Even as the mechanics of the rescue team cut open the side portions of the derailed coach with sophisticated gadgets powered by the portable generators, ambulances and fire engines arrived at the spot with medical paramedical personnel to shift the ‘injured’ to the make-shift tents set up in the vicinity for first-aid and treatment.

Personnel from Fire and Emergency Services, Government Railway Police and Railway Protection Force, Railway Safety Wing, Railway Mechanical Wing and Railways Communication Department were involved in the mock drill. Teams were divided into several units who practiced cutting the compartments by cutting the railing of the windows of the compartments, and taking out the passengers.

“The derailment of a coach with 15 passengers was enacted. A condemned coach was used to cause the derailment,” said DRM Rahul Agarwal.

He said that the ‘golden rules of rescue operation’ such as commencing the rescue operation as early as possible by mobilising men and material at the accident site, evacuation of the injured to the hospital, removal of derailed coaches, restoration of traffic in the affected section, informing the victims’ relatives about the accident were checked during this exercise.

“If any delay in response is found, it will be rectified so that all stakeholders of the rescue operation can react to the accident immediately to save as many victims,”  he added.