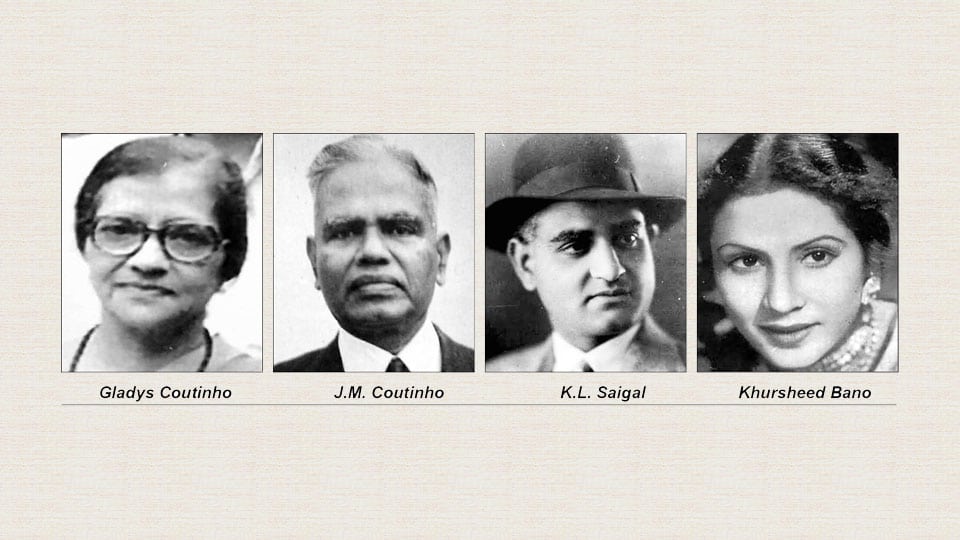 More Music comes looking for Me !

Starting from the days of my early childhood, till as late as the late seventies, we had this tradition of listening to our collection of records, first on our hand wound gramophone and later on the much newer electric record players that we acquired as time went by. Whenever we had visitors at home, it was always my self-acquired job to carefully remove the records from their paper sleeves and play them one by one to the delight of our guests and these happy sessions would go on late into the nights because our collection of records was very large.

And, although this practice persisted even as we acquired our first cassette player in the year 1972, it began to take a back seat gradually, till it slowly faded away in a decade after that. Because the same change of scene occurred in almost all music loving households, the era of gramophone records, which by then had come to be called vinyl records, made way for the compact cassette completely.

Record players in almost all households sadly fell silent and people started disposing off their records which were gathering dust in their attics and garages. That was when one day Mrs. Gladys Coutinho, the wife of my high school headmaster J.M. Coutinho, who was our neighbour, offered her entire collection of vintage English music records to me as a gift which I was overjoyed to receive. I still have this collection with me in the original custom-made wooden box in which it came to me!

A little later, when I saw an ad in SOM which said that a lady wanted to sell away her record player with her collection of records of old Hindi songs, I lost no time in rushing to her house and ringing her doorbell. I picked up this player and every one of the records without bargaining with her and while she seemed very happy to have got the price she wanted for them, I on my part was more than happy that I had got so many songs and a player too for a song!

The interesting part here is that when I accidentally met this genial old lady a few years later, she seemed overjoyed to see me and after a brief conversation, as we were about to say goodbye, she asked me if I still had the records she had sold me. When I replied in the affirmative, she very hesitatingly asked if she could make a small request to which I asked her to go ahead. She then asked me if I could give her just one of her records back to her as a keepsake? How could I say no to someone who had given away a storehouse of happiness to me?

When I asked her if she wanted just any record as a memento or any particular record, she mentioned one and said she would be happy if I could give her that because it was a gift, she had received on her birthday from a close relative. I told her to go home and wait for me and this time too I lost no time in rushing to her house and ringing her doorbell, holding my gift for her in my hand! That was when she tearfully said that I had brought so much of happiness into her life with my act of generosity. She said, “Doctor, although I’ll never be able to play this record without its player, I’ll still treasure the memory of having listened to it and whenever I set my eyes on it, I’ll hear it playing!”

To illustrate her point she quoted this Urdu couplet by the poet Hayath Amrohvi: ‘Zindagi, ka saaz bhi kya saaz hai, Baj raha hai, par beawaaz hai!’  Translated it means: ‘So strange is this melody of my life, It plays on in my heart but only soundlessly!’

The two very unexpected musical acquisitions of mine extended the gramophone era for me by a full decade. Although I could easily have copied this music onto tapes, I did not do so as I relished and cherished the romance of playing those records on an old-fashioned turn-table and listening to them late into the nights on weekends with my best friend, Arun Joyappa, with the two of us munching crisp pakodas! Arun had his own large collection of records which he would bring over to supplement mine and those were really magical days for the two of us!

A couple of days after I wrote the first piece of this vintage music series which you are now reading, my friend Mukesh and his wife Madhu came calling once again with another set of four unused gramophone records which they had earlier said they might bring. Of these, three were of the legendary singer K.L. Saigal who ruled the music world during his time, and one was a much rarer one of Khursheed Bano the doyenne of the vintage era.

Saigal needs no introduction to music lovers. Either you know him as the singer he was or you just do not know him at all! Since he was a very handsome man and a very accomplished actor in addition to being a singer, he was considered the first ‘superstar’ of the Hindi film industry which was then located in Kolkata before it gradually moved to Mumbai. Saigal’s voice became the benchmark for almost all male singers of that era and most of them unabashedly discarded their own original voices to mimic him and climb the mountain of success! Because he died at the age of just forty-two, in a very brief career spanning over just fifteen years, Saigal left a legacy of music that could not be matched for many years by any of the singers who came on the scene after him.

Born as Ishrat Jahan, in a village near Lahore, Khursheed Bano started her film career in the year 1931 although the first record of her songs was struck only in the year 1939. She sang many songs with Saigal and her style of singing which cannot be described in words and which we now just label as the ‘vintage style’ became extinct with the arrival of Lata Mangeshkar. I can only say that what was most distinctive about it is the sharp nasal tone which perhaps all singers of that era, both male and female, felt was the most important requisite for any accomplished singer!

Now, the solitary record of this lady that I received was of two songs from the film Bhakt Surdas, which along with the film Tansen, was a raging hit of that time. Very soon after I received this second set of four records, I received a mail from a young engineer, Mithun. He wrote to say that his father Madanraj Urs, who was a regular reader of my column, had a collection of about twenty-five gramophone records which he wanted to hand over to me as a gift. My joy knew no bounds but since I was away from Mysuru at that time I replied saying that I would contact his father after my return which I did without wasting any time. We scheduled a meeting at my house the very next day and meet we did. But the story of this most interesting meeting needs to be told in much greater detail and so I’ll leave it untold here today but certainly not for very long! So please stay tuned!