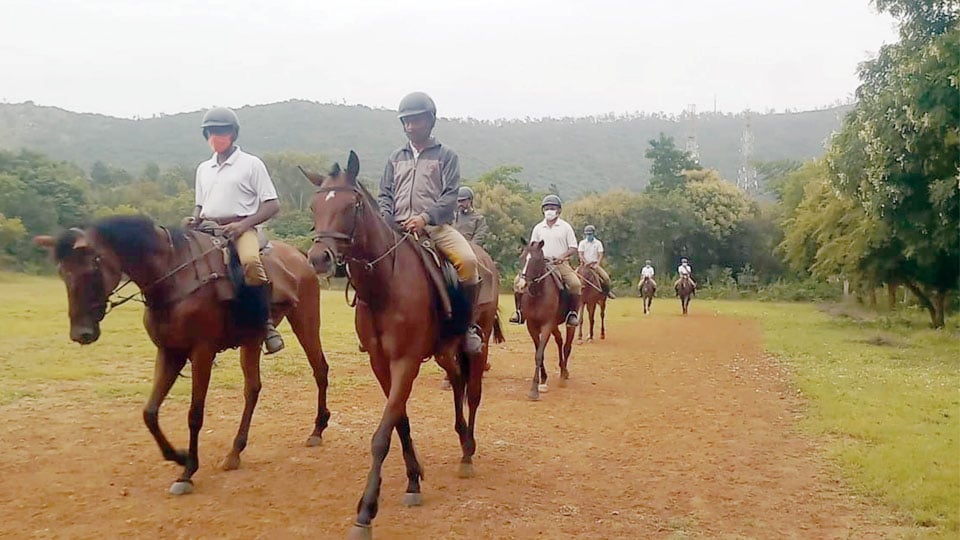 Mysore/Mysuru: Though the State Government has decided to celebrate Dasara from Oct. 17 – 26 in a simple manner this year by limiting the ‘Jumboo Savari’ only to the Mysore Palace premises, owing to Corona pandemic, the personnel of the Mounted Police force have begun their training for the Dasara procession.

Thirty-five horses from the Mounted Police battalion, with its headquarters on Lalitha Mahal Road, will be participating in the ‘Jumboo Savari’ to be held on Vijayadashami Day.

Mounted Police Commandant Nagaraju, speaking to Star of Mysore, said that like every year, this year too 35 horses from the Mounted Police force will take part in the procession to be held at Palace premises.

He said that every morning, the horses are led to Chamundi Hill, Nandi Statue and surrounding places, where the staff train them and added that as Dasara was nearing, training would  be provided to these 35 horses in the mornings and evenings at the Horse Park (foot of Chamundi Hill) and in Palace premises.

Nutritional diet: These 35 horses have been put on nutritional diet by providing them with rich protein food, besides conducting exercises to them and regular health check-ups, Nagaraju said and added that the horses were closely monitored for their health. Following outbreak of COVID pandemic, the entire Mounted Police building premises is being sanitised daily and the staff are compulsorily wearing face masks and maintaining social distancing, the Commandant said.

Mayor to go on horseback?

The Mayor, Mysuru’s First Citizen, leading ‘Jumboo Savari’ on horseback is a more than 30-year-old tradition. The Mayor is expected to lead a procession of Dasara elephants with the Howdah elephant carrying the 750-kg Golden Howdah.

However, this year, it is yet to be decided whether the Mayor, the City Police Commissioner and the Zilla Panchayat (ZP) President will have the opportunity of going on horseback during ‘Jumboo Savari’ with COVID restrictions limiting the number of people. City Police Commissioner Dr. Chandragupta, who is also the Dasara Procession Sub-Committee Special Officer, speaking to Star of Mysore, said that as Dasara is being celebrated in a simple manner and ‘Jumboo Savari’ limited only at Mysore Palace premises, it is yet to be decided on our participation.