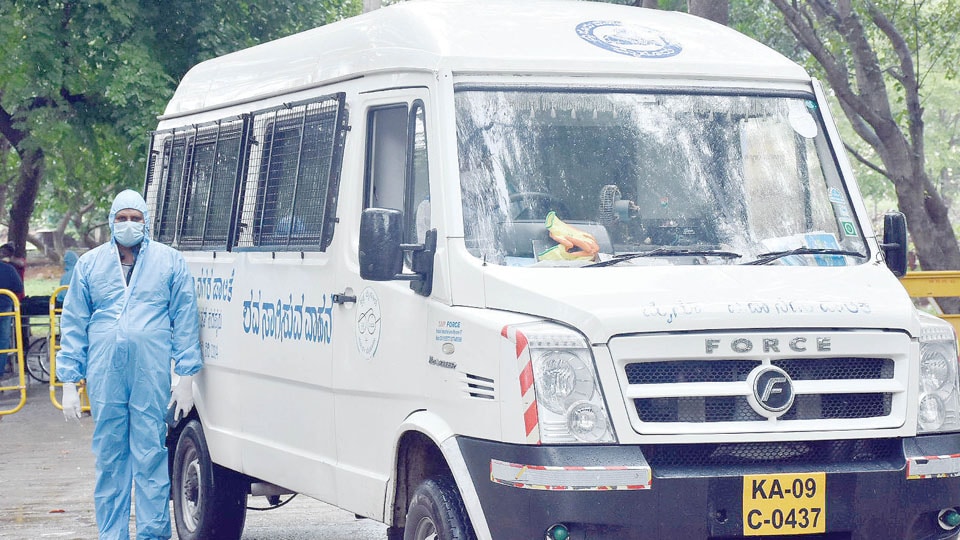 Delay in reporting mechanism is cause for many deaths, says District Surveillance Officer

Mysore/Mysuru: The mounting Case Fatality Rate (CFR) in Mysuru at a time when the positivity rate is declining rapidly is a big cause for concern as the number of patients succumbing to COVID-19 infection has gone up with 286 deaths reported in a span of 15 days, from June 1.

As per the media bulletin released by the District Administration yesterday, till now, 1,910 persons have lost their lives in the pandemic. The War Room report says that from May 1, 2021 to May 31, Mysuru reported 420 deaths and from April 1 till April 31 this year, 151 deaths have been reported. That means, the death numbers have increased from May this year and from June 1 till June 15, 286 deaths have been reported.

From June 1 to June 12, Mysuru was reporting an average death rate of 15 to 22 persons per day and from June 13, the district has been reporting 25 deaths per day and yesterday, 26 deaths were reported.

According to a press release by District Surveillance Officer Dr. Shivaprasad, death rate has increased as the data of deaths of patients in home isolation and of the patients who have been discharged from the hospitals was not immediately available. The details are available only after 10 days when the triage team members take information from the families, he stated.

Secondly, when a patient dies at home, it is reported in the ‘community death audit’ and there will be a delay in information collection.

Thirdly, according to Dr. Shivaprasad, a few private hospitals submit the daily death figures only once in a week to the District Surveillance Office and as such, the death numbers are high now.

Fourthly, there is a delay in death reportage by ‘Suvarna Aarogya Suraksha Trust’ (SAST) and SAST is not reporting the deaths by the fixed deadline. These are patients who have been admitted under SAST scheme (free Government treatment) after COVID-positive confirmation from CT scans.

Though delay in reporting mechanism has been cited as the major reason for increased deaths by Dr. Shivaprasad, it is not explained in his clarification that how the total number of deaths increases in spite of late reportage of death data.

Meanwhile, Deputy Commissioner (DC) Dr. Bagadi Gautham this morning attributed the increased death rate to the delay in reporting deaths that take place in both private and Government hospitals and ramping up of RT-PCR tests.

Talking to reporters, he said if deaths occur before the confirmation of COVID positivity, then the data is accumulated through triage. Second reason has been late reporting of deaths in private and Government hospitals.

The third reason is that if a COVID positive person dies after discharge then the information is collected through War Room and that process will take time.

‘Lack of medical staff is the real reason for deaths’

Meanwhile, Founder and Managing Director of Skanray Technologies Vishwaprasad Alva has opined that the increased death rate in Mysuru is due to lack of medical staff, paramedics and absence of a skilled approach in dealing with the pandemic. “Any amount of increase in beds and equipment will not arrest the fatalities. The need of the hour for the District Administration is to have a formal staffing and skill programme for doctors and paramedics,” he stated.

The treatment protocols of Government Hospitals and the Private Hospitals are different and this information needs to be shared for learning among medical professionals. “Some smaller hospitals are actually becoming a hot-bed of fatalities as they do not have qualified doctors. Also, there is a mismanagement of cases where mild and moderate cases are converted to severe case,” he observed.

The Government must create a Command and Control Centre in Mysuru and bestow powers with the District in-Charge (preferably a local MLA who is available in Mysuru 24×7) and the Deputy Commissioner and conduct independent audits to check on the availability of drugs, doctors and staff and track the progress on a day-to-day basis, he said.

“Innovative cross training of doctors of other specialities to treat COVID patients, addition of volunteers and paramedical staff is critical at this juncture and also in preparation for the potential third wave. Only these measures will make up for the shortfall of professionals,” Alva opined.