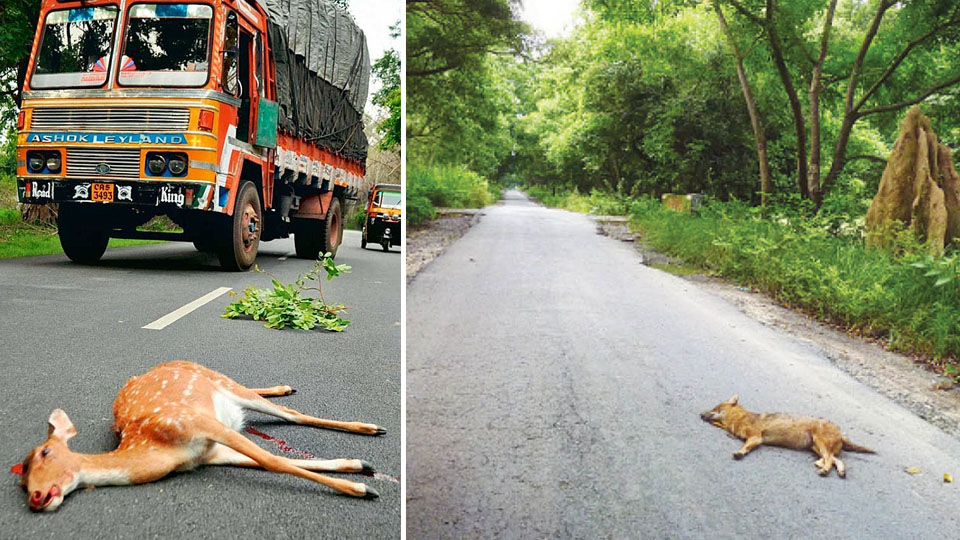 Move to Reduce Roadkills: Buses to ply at 30 kmph via Chamarajanagar forests

Chamarajanagar: In a major move that could reduce roadkills, the Karnataka State Road Transport Corporation (KSRTC) and Forest Department authorities have imposed speed restrictions on government and private buses passing through forest areas in Chamarajanagar district.

It may be mentioned here that National Tiger Conservation Authority, State Wildlife Board Member Sanjay Gubbi and other wildlife activists, including Santosh and Mahadevaprasad of Vanya Jagruthi Team, in an appeal to the Forest Department had requested it to drastically cut down the speed limits of the vehicles to prevent them from killing wild animals.

The appeal had pointed out that reckless driving through forest areas was a risk not only to wildlife, but also posed a danger to motorists as they could be stranded in the middle of nowhere in jungles.

As they are highways, drivers move in break-neck speed and over-speeding usually results in roadkills. Taking note of the appeal, the Department has now imposed speed limit restrictions.

The district is rich in forests and wildlife and is home to Bandipur Tiger Reserve, BRT Tiger Sanctuary, Cauvery Wildlife Sanctuary and MM Hills Wildlife Sanctuary, all of which are criss-crossed by the State and National Highways. Though there are speed restrictions along certain stretches of roads passing though protected area, it was not followed by reckless motorists nor can it be monitored.

At present, there is a night ban on vehicular traffic via the National Highways and State Highways that connect Karnataka to Kerala at Bandipur Tiger reserve and Nagarahole National park.

Though there have been roadkills even after the ban on night traffic, they have come down drastically. The Bandipur and Nagarahole helped Mysuru achieve the distinction of being the tiger capital of the world. Apart from a significant decrease in the number of fatalities, the ban has allowed wild animals their space, said Forest Department officers.

They said that number of roadkills may be underestimated as many injured animals drag themselves off to die in the nearby shrubbery. Some carcasses are scavenged by other animals, which also fall prey to speeding vehicles. The total number of animals being killed on roads running through Bandipur and Nagarahole is unknown.

An Ooty-bound KSRTC’s luxury Airavata bus met with an accident yesterday morning near Raghavapura on the Bandipur National Highway. The bus was on its way from Bengaluru to Ooty and the over-speeding driver lost control resulting in the bus colliding against a small bridge. The impact of the accident was such that the front portion of the bus was damaged, glasses shattered and its front tyres were detached from the axle. Fortunately, no passenger was injured. 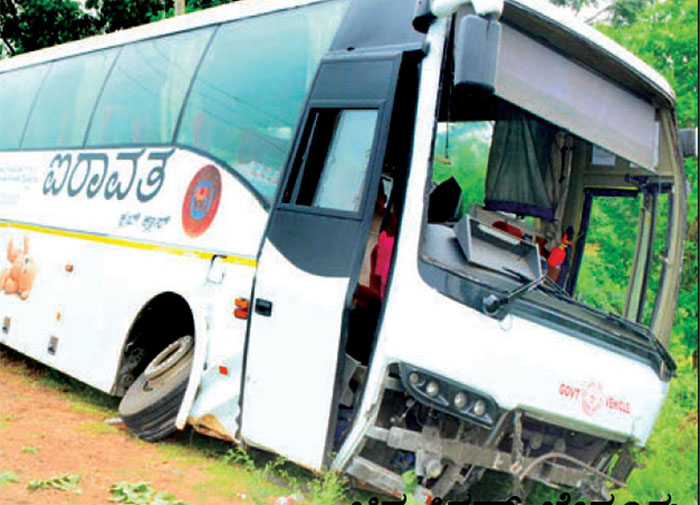