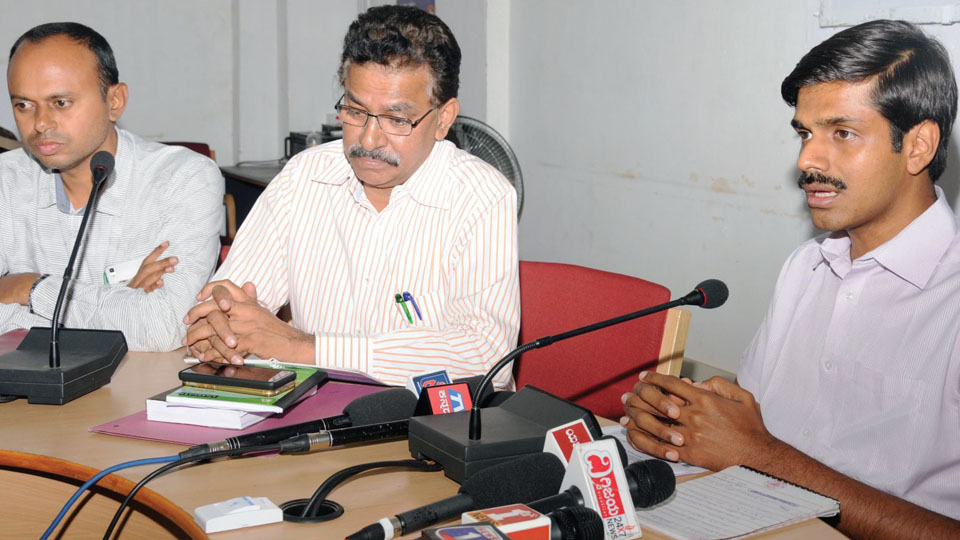 Kerala travellers to be screened for Nipah symptoms: Mysuru DC

Mysuru:  Mysuru is on high alert, especially in areas bordering Kerala, after 11 people died of the mysterious Nipah Virus (NiV) in Kozhikode over the last few days.

The Karnataka State Health and Family Welfare Department has directed Primary Health Centres (PHCs) in Chamarajanagar, Kodagu and Mysuru districts, which share the border with Kerala, to be alert and to report any patients from Kerala with suspected Nipah cases, said Deputy Commissioner Abhiram G. Sankar.

He was speaking to reporters at his office last evening on the measures taken by the District Administration to curb the spread of the deadly virus. The DC also chaired a meeting with health authorities and reviewed the preventive measures.

He said those travelling to Kerala should be cautious when and if they come in contact with Nipah-infected people. “Avoid eating fruits fallen on the ground and drinking raw date palm sap. Avoid coming in contact with sick domestic animals and   pigs,” he said.

As a lot of tourists from Kerala visit the major tourist destinations in Mysuru almost every day, the DC said adequate precautionary measures, including setting up isolation wards in the State-run K.R. Hospital, Cheluvamba Hospital and Epidemic Diseases Hospital, have been taken.

So far, there have been no suspected cases in the district. Private hospitals have been directed to set aside at least five beds for emergency treatment of patients with flu-like symptoms, he added.

As part of the precautions, the health department has decided to screen travellers from Nipah affected areas — Kozhikode and Malappuram districts of Kerala — for 18 days if they exhibit flu-like symptoms. Chamarajanagar, Mysuru, Kodagu, Dakshina Kannada, Uttara Kannada, Udupi, Shivamogga and Chikkamagaluru health officers have been instructed to file a daily outbreak report of Nipah virus.

Nipah virus infection spreads from animals to humans and can cause severe conditions. The natural host of the virus are fruit bats of Pteropodidae family – Pteropus genus. The virus transmits through direct contact with infected bats, pigs or from other NiV-infected people through touch or body fluids. The disease is contagious and can spread from person-to-person, he said.

The infection in humans can cause a wide range of clinical presentations, from asymptomatic (no symptoms) to acute respiratory syndrome (cough, breathlessness and respiratory distress) and fatal encephalitis (inflammation of the brain).

After exposure to virus, symptoms start after an incubation period of 5-14 days. Usual symptoms are fever and headache for 3-10 days followed by drowsiness, confusion and seizures. Signs and symptoms can progress rapidly to coma and death in 24-48 hours. Nipah Virus encephalitis is fatal with a high mortality rate.

The Deputy Commissioner also said that fruits grown in trees such as papaya, chikku (sapota), and mango with bite marks should not be eaten as they may have been bitten by fruit-eating bats. It is better to avoid cut fruits sold on the streets but there is no threat to eating fruits at home after confirming they do not have bite marks. The HOPCOMs here had been directed to properly discard waste fruits, he said.

Patients to be quarantined

Sankar said awareness, case detection and symptomatic treatment with standard procedures would get priority. If fever and other symptoms don’t subside even after symptomatic treatment, the patient will be isolated for continuing the treatment in separation with round-the-clock observation. He asked school and college authorities to educate students and take adequate precautions as the infection can spread from an infected person to a healthy person.

As the infection can spread from fruit bats to pigs, instructions had been given for educating people rearing pigs in the district to take precautions, he said, adding that pig owners should not feed discarded and rotten fruit to pigs.

Tourists heading towards Kerala and people coming from there will be given advisory materials on the dos and don’ts. These materials, printed in Kannada, English and Malayalam, will be distributed at bus stands to spread awareness.

District Vector-Borne Diseases Control Officer Dr. S. Chidambara said there is no prescribed treatment to Nipah infection. On contracting the virus, the patient can get encephalitis and could slip into coma if he or she is not treated immediately.